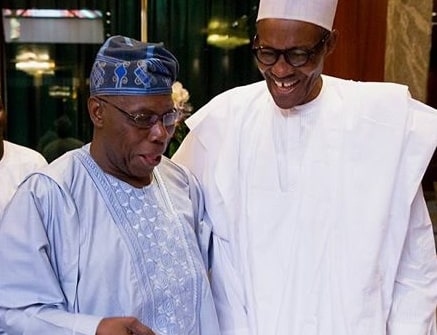 Yoruba Leaders Slam Obasanjo For Attacking Buhari, Say His Comments Were Unbecoming Of A Statesman

Some Yoruba leaders of thought under the aegis of Yoruba Patriots’ Movement, on Tuesday berated the former President Olusegun Obasanjo over his recent attack on President Muhammadu Buhari.

The group who expressed disappointment on the outburst of Chief Obasanjo stoutly rose in defence of president Muhammadu Buhari.

The National Coordinator, Yoruba Patriots’ Movement, Chief Oladosu Ladipo, said the comments of the former President were unbecoming of a statesman.

They were of the view that the unsubstantiated allegations against the president have “reduced his (Obasanjo’s) value both politically and intellectually”.

Wondering about the alleged inconsistency of the ex-president, Chief Oladipo who was flanked by the National Treasurer who doubles as the Lagos state Chairman of YPM, Dr Wale Omole and the National Secretary, Otunba Niyi Dada during his 72ndbirthday anniversary which held at his residence in Ibadan, said the aspersions had further waned the integrity of the former president.

Chief Oladipo said, “Two things I see, making a U-turn or somersaulting in the broad daylight has reduced his value both politically and intellectually. It has reduced his integrity; reduced all his virtues and has put him as somebody whose words cannot be relied upon and who cannot mentor the up and coming generations. In fact, he is double-mouthed”.

“Two, the history of 1999-2007 is still with some of us; the facts between Obasanjo and Atiku. I mean facts that cannot be debunked. So, I want to leave that aside for now. The other one is that democracy involves propaganda and propaganda involves truth, half-truth, total falsehood and blatant lies. I can describe the things he is saying as total falsehood, mere propaganda. Can a good Statesman make propaganda? Shagari died at the age of 93; did you hear him say anything like this? What he is doing is propaganda for post-election riot, which can be an inducement for the military to take over, and military cannot take over in Nigeria again.”

Dr Omole who read a prepared statement to journalists said, “Those of us with genuine intention shall support these great leaders to take Nigeria to the next level. The national looters of yesterday should please go to sleep and give development a chance. We call on smaller parties to merge with APC which is now a mega party. I want to advise Nigerians not to take Chief Obasanjo serious.

The elders described the national leader of APC, Asiwaju Ahmed Bola Tinubu as a great man following the footsteps of the late sage, Chief Obafemi Awolowo.

“Awolowo is also back to life in the person of Asiwaju of Yorubaland. For the youths who did not know Chief Obafemi Awolowo, once you know Asiwaju Ahmed Bola Tinubu. You have known Awolowo. Chief Awolowo and Tinubu remain the greatest tacticians in the history of Nigeria”, Oladipo said.

“Consistency is very important. Look at America politics, if you have said something, many years after, they will play it back to you. Obasanjo’s book on Atiku is very recent and very current and has he made another edition to counter all those things he said about Atiku? That goes to the root of character. And before you can take whatever anybody says with a grain of salt, you have to look at its traits of character overtime, consistency from the family to the ward, to the local government, hometown, tribe and then to the nation”.

“Obasanjo is a father of the nation, but if I were him, I will behave like a father. Danjuma is supporting political parties, have you seen or heard him making such a statement that cannot be substantiated or nearly causing chaos? The fact that you had the privilege of being the Head of State or President does not mean you are the wisest. It doesn’t mean that you are the best”, the elders said.

“Sometimes, the opportunity comes for a nation to develop, many a time the people scuttle the chance and lose that opportunity. But, opportunity always comes and goes. We lost the golden opportunities when Gen. Muritala Mohammed who came on board with clear agenda was prematurely terminated in 1976. We equally lost that chance when the great sage, Chief Obafemi Awolowo, the man with rare intelligence and vision was prevented from ruling Nigeria. He did not lose, Nigeria lost. Nigeria missed it again when Chief MKO Abiola’s life was prematurely terminated.

“If these great leaders had been allowed to lead the nation when the opportunities presented them, certainly Nigeria would not be where it is today. We would have long been out of woods. If perhaps Buhari-Idiagbon military regime had not been cut short by the military coup of August 1985, Nigeria would have been taken to a higher ground of development because the duo of Buhari and Idiagbon were burning with passion and vision. They were ready to serve. They abhorred corruption.

“Today, we are lucky to have Buhari and Professor Yemi Osinbajo. It is another opportunity for Nigeria to develop. We should not waste this opportunity else it becomes a curse on our nation. Nigeria should have learnt its lesson by now. Therefore, members of Yoruba Patriotic Movement have thrown our unflinching support for Buhari-Osibajo and APC.

“With this political tactician in support of Buhari and Osinbajo the nation will witness development and growth. The trio will return Nigeria to the path of progress. There will be jobs for the youths. Things will turn around for better for Nigerians at home and abroad. Those of us with genuine intentions shall support these great leaders to take Nigeria to the next level. The national looters of yesterday should please go to sleep and give development a chance. It is on this premises that we, in YPM, call Nigerian youths to support this administration”, they said.

Continue Reading
You may also like...
Related Topics:leader, obasanjo, political