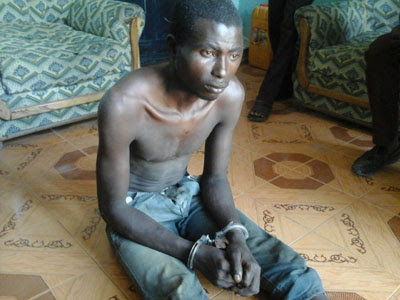 May 19, 2016 – Picture: Boko Haram Member Wipes Out His Entire Family In Potiskum Yobe After They Threatened To Report Him To The Military

The suspected drug addict who killed his parents and siblings in Potiskum, Yobe State has been arrested.

A source close to the family of the victims said 28-year-old Adamu Mai Bisco is a Boko Haram member who lost his temper after his parents threatened to report him to the military.

The suspect reportedly wiped out his entire family using a shovel around 1am on Monday morning while they were fast asleep.