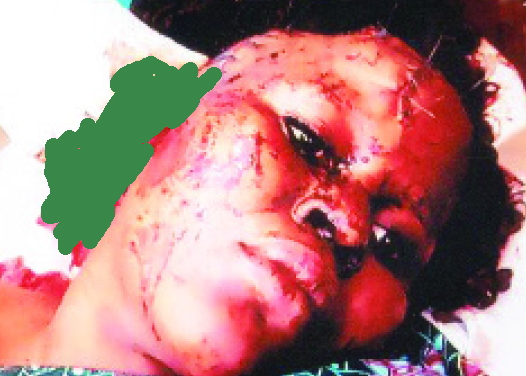 Feb 12, 2017 – Bloodbath As Man’s Attempt To Kill His 2 Daughters In Yenagoa Bayelsa Failed

2 sisters who escaped death by the whiskers would henceforth view their father as the devil’s incarnate after his failed attempt to murder them.

The extremely lucky young ladies, 23-year-old Ezonboere Odoni and her 16-year-old sibling, Miemene Odoni, are receiving treatment at the Niger Delta University Teaching Hospital, where they were taken to by benevolent neighbours.

As Sunday Sun gathered, the victims were viciously attacked by their father, Ekpokemem Odoni, 57, who dealt deep machete cuts on the heads, hands and legs of his daughters with clear intent to kill them while they were sleeping.

The chain of events that brought the two sisters close to death’s door began when their father sustained a serious injury on his right leg in Sagbama Local Government Area, Bayelsa State, where he had gone to cut wood.

When he got home, and in show of love to their father, the Commissioner of Police, Mr. Amba Asuquo told Sunday Sun that the two sisters boiled hot water for the suspect to bathe with and also cleaned the wound which had started to smell. They also sought to prepare food for him.

At this point the devil strolled into the situation, and pushed Ekpokemem to doubt the good intentions of his daughters, claiming that he overheard them plotting to kill him by putting a charm in his bath water and on his bed.

Egged on by the devil, his mind went into overdrive. About 11.00pm when his daughters were sleeping, he suddenly picked up his machete, allegedly went into their room and viciously attacked them, and cut them on the head, shoulders and other parts of their bodies.

Seeing the massive flow of blood, and believing that his daughters were dead, he ran out of the house in an attempt to get away from the scene of the alleged crime. But that very moment, a police patrol team was in the area. Upon his undue haste and furtive glances, they became suspicious and pulled him aside for routine questioning. In the process, he spilled the beans and confessed what he had just done to his daughters. He was taken to Akenfa Police Station, from where the case was transferred to the headquarters of the State Criminal Investigation Department (Homicide Section), Bayelsa Police Command, Yenagoa.

Meanwhile, neighbours quickly rescued the two daughters and took them to Niger Delta University Teaching Hospital, Okolobiri, where healthcare staff battled to save their lives.