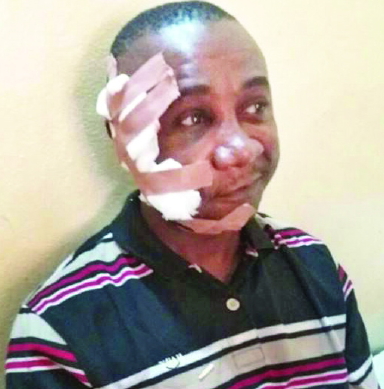 Catholic Priest of Nnewi Diocese, Anambra State, Rev. Fr. Jude Chetanna Chukwuneke, would have been dead and buried by now if not for divine intervention.

Chukwuneke, a youth motivator and the Chaplain, St. Camillus De Lelis Catholic Chaplaincy, College of Health Sciences, Nnamdi Azikiwe University, Okofia, Nnewi Campus, was attacked by suspected Fulani herdsmen on Monday, September 26, 2016, while returning from the burial ceremony of the mother of a fellow priest in Nsukka Diocese, Enugu State.

In company with two other priests, Rev. Prof. Jude Ezeokanna and Rev. Fr. Emmanuel Dim, the attack, which happened within the Uzo-Uwani axis of the old Adani-Anambra road, left in its wake sorrows, tears and blood.

Chukwuneke, who was driving, was shot in the head by one of the herdsmen and in a staggering deadly fit, lost control of the steering and the vehicle ran into a ditch. Though he escaped with serious injuries, the exhaust pipe of the vehicle caused serious burns on his colleague, Ezeokanna, who attempted to jump out of the vehicle while the attack lasted. Dim was forcefully abducted by the attackers. 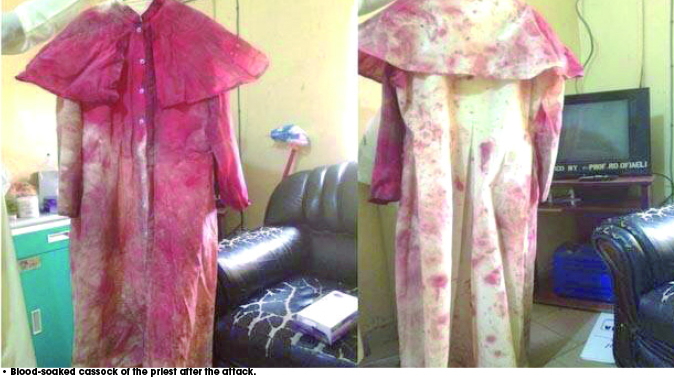 Through intelligence gathering and spirited efforts, the kidnappers released Dim two days after while Chukwuneke and Ezeokanna began the tortuous battle to save their lives at different hospitals.

After undergoing treatment at different hospitals in Nsukka, Enugu, Anambra and also abroad, which lasted for four months, Chukwuneke, who still has some pellets lodged in his head, gathered friends and well wishers recently at the College auditorium in Nnewi for a thanksgiving service.

At the ceremony, which attracted several dignitaries including Anambra Governor, Willie Obiano who was represented by the Commissioner for Education, Prof. Kate Omenugha; Secretary to the State Government (SSG), Ebonyi State, Prof. Bernard Odoh; former SSG, Anambra State, Oseloka Obaze; and business mogul, Chief Cletus Ibeto; among others, Chukwuneke told the pathetic story of his encounter with death and how God miraculously saved him. “I’m resting in peace but still alive,” he said pathetically.

Narrating his ordeal inside the capacity filled auditorium, Chukwuneke recalled how on that fateful day they had finished their condolence visit to Nsukka and were chatting in the vehicle on their way back to Anambra when suddenly, few minutes after passing a police check point, they came upon a figure on the road holding a gun about 200 metres ahead. He said he looked back and spotted another figure, also some 200 metres behind. Sensing trouble, he decided to take the option of escaping by engaging the reverse gear. This was the last thing he recalled doing.

“It was a marksman that shot me at a close range and if you see my vehicle dashboard, you will realise that miracles do happen even now. He pointed the gun directly at my face and the bullet shattered the windscreen and penetrated. The next was that I found myself in the middle of the bush about 20 metres away from the road. I also realised that I was bleeding profusely in the head and that my immaculate white cassock has been drenched in blood.

“Fearing for my life, I asked Fr. Ezeokana who was in the passenger seat to perform the last rites for me but he was also traumatised. At this point, I told my fellow priests let everybody run for dear life. But I was pursued by one of the gunmen who soon caught up with me and demanded for money.

“I told him I had no money. He cocked his gun as if to shoot me again, but probably believing there was no need, and since I would soon die because of the amount of blood he saw, he left me and ran back towards the others in the car. I soon heard one of the priests shouting, ‘I am a priest of God!’ and when I looked, I saw Fr. Emmanuel Dim being marched off with his hands in the air.”

Chukwuneke said that at that point, he remembered that he had a watch; he tore it off his wrist to check the time and realised it was 6.15pm. He stated that his experience in the modus operandi of robbers told him that they do not usually remain at the scene of robbery beyond 20 minutes. But he decided to wait another 10 minutes before making a move.

According to him, his decision to move out of the bush was to ensure that even if he died, his body would be discovered. When he succeeded in coming to the road, he tried stopping passing vehicles whose drivers refused to stop. He saw a group of people at a distance and began to run towards them. But after running for about 200 metres, he became exhausted.

It was then that God sent one Ebuka Oluka to help him. Chukwuneke said he immediately grabbed the scruff of Ebuka’s shirt for support. Together, they ran again for the rest of the distance towards the group of people. He stated that while he ran, he kept calling out the phone number of his brother which was the only number he had memorised. He said he was doing that because he was afraid that he could pass out at any moment.

He said that Ebuka tried calling his brother with the number but he did not pick his calls. Before then, Ebuka had pulled off his shirt and wrapped it on Chukwuneke’s head to stem blood flow. When they eventually got to the people, he was taken to Bishop Shanahan Hospital, Nsukka.

Chukwuneke expressed regret that in most cases in Nigeria, people die and property are also lost due to ineffectiveness of emergency services. He recalled that when it became expedient that he should be transferred to a specialist hospital in Enugu for proper medicare, he was surprised that even the life ambulance that was supposed to convey him first of all had to look for a nearby filling station to buy fuel before they could proceed on the journey.