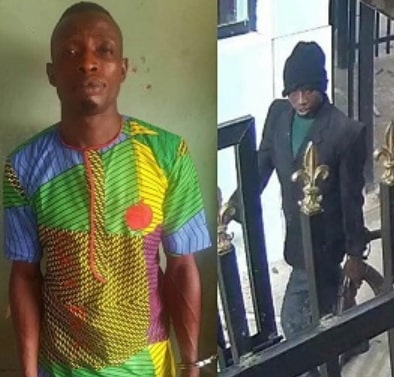 How can a suspect… in custody now be said to have died in the course of arrest? This contradiction shows a deliberate attempt to cover up something.”

The principal suspect in the deadly April 5 bank robbery attack in Offa, Kwara State, Michael Adikwu, is dead. Force headquarters of the Nigeria Police passed the information about the death of Adikwu to the office of the Kwara State Attorney General and Commissioner for justice, Kamaldeen Ajibade, a Senior Advocate of Nigeria (SAN), on Tuesday.

READ ALSO: Offa bank robbery allegation: Abuja court bars police from quizzing Saraki
Ajibade disclosed this when five suspects in connection with the Offa bank robbery were arraigned before an Ilorin High Court yesterday. He told the court that in view of the information about the death of Adikwu and non-representation of the accused persons by a counsel, it would be necessary to amend the charges preferred against the suspects.

He also informed the court that the reason behind the amendment was that Adikwu had made a statement to the police before his reported death.

Ajibade, therefore, urged the court to grant a short adjournment of one week to enable his office to effect necessary amendment to the charges.

In her short ruling, Justice Halimat Salman agreed with Ajibade that there was need to effect some change in the charges preferred against the accused in view of the reported death of the principal suspect and lack of legal representation for the accused persons.

She, therefore, adjourned the case till November 30.

The suspects allegedly stormed Offa and robbed many banks, killing about 31 persons in the operation. The suspects, who appeared before the court were Ayoade Akinnibosun, Ibikunle Ogunleye, Adeola Abraham, Salaudeen Azeez and Niyi Ogundiran.

They were arraigned on a three-count charge bothering on criminal conspiracy, armed robbery and culpable homicide, which contravened the provisions of sections 6 (b) 1(2) of the Armed Robbery and Firearms Act and 221 of the Penal Code.

Saraki, who unlike Ahmed, enjoys no immunity from prosecution, was questioned by the police for his alleged role in the scandal. During the controversy, the police moved the suspects to Abuja and allegedly refused to cooperate with the Kwara State government for their trial.

What happened in court yesterday appeared to show the police have now handed the suspects to the Kwara legal team for prosecution. The police are also yet to prosecute Saraki and have kept mum on his alleged role since saying further investigations were ongoing.

Meanwhile, following the eventual disclosure by the police that Adikwu is dead, Saraki yesterday called on the Presidency to institute a judicial inquiry into the ‘how and when’ the suspect died. In a statement by his Special Adviser (Media and Publicity), Yusuph Olaniyonu, Saraki noted that the new disclosure by the police has vindicated his earlier claim that the suspect had been murdered in police custody and that the investigation was politically motivated to implicate him (senate president), Ahmed and a few others.

He stated that the inquiry would help to thoroughly examine and interrogate how the investigation into the robbery incident was conducted by the police and whether the investigation followed the normal process and complied with global best practices.

He added that the police needed to confirm why it took them so long to make the disclosure about the death of the principal suspect after they categorically denied it at the time he (Saraki) disclosed the information and it was reported in the media. He said: “It should be recalled that when we mentioned it that the principal suspect had been murdered and that investigation into the Offa robbery attack was politically motivated and targeted at implicating me and other individuals, the Force Public Relations Officer, Moshood Jimoh, said.

“Michael Adikwu is in police custody. You know that he is the one that led the killing of 22 people. The firearms that were carted away, he is helping the police in the investigation to recover them. There is a state in the southwest where they kept him. I can’t mention the state. It is in one of the southwest states.

“The fresh facts have now thrown more light into why there had been inconsistencies in the various statements by the police. The police initially told the Attorney-General of Kwara State that the principal suspect was alive and they only later reluctantly disclosed that he died in the course of arrest. How can a suspect confirmed to be in custody now be said to have died in the course of arrest? This contradiction shows a deliberate attempt to cover up something.

“It is obvious that the police have orchestrated the information they give to the public on the Offa robbery only to tarnish the image of the Kwara State governor and myself. We are calling for a public inquiry to probe the issues of extra-judicial killing, the cover-up of this killing with the aim of framing up some individuals for political purpose and politicizing of criminal investigations. The facts need to be laid bare.

“The inquiry may help to further document and define the terms of handling of suspects in police custody and how to prevent extra-judicial killing of suspects, for whatever purpose. There is need for transparency in investigations into all cases and our methods should comply with global standards. We should discourage situations where police politicize investigations and deliberately set out to frame some individuals.

“With the facts on ground, the issues that should be unearthed by the inquiry include: When exactly did the suspect die? How did he die? Why was the police denying the facts of his death when they knew he had died? At what point did the police leadership know of the death? Why are the police covering up the facts? We believe the answer to these questions will help the country to address the issue of human rights abuse, extra-judicial killing, manipulation of criminal investigation to achieve political end, deliberate attempt to cover up some facts, and how skewed investigation of crime can impact on successful prosecution of suspects.” Similarly, the Network on Police Reforms in Nigeria (NOPRIN) has urged President Muhammadu Buhari to order an investigation into the death of Adikwu. In a statement issued yesterday, National Coordinator of NOPRIN, Mr. Okechukwu Nwanguma, called on Buhari “to order an inquiry into the circumstances surrounding Adikwu’s suspicious death in police custody” as well as ensure that the police “account fully for the cash and other exhibits recovered from Adikwu.”

The statement reads: “The widely expressed fears about the fate of Adikwu, the prime suspect in the Offah robbery, have finally been confirmed by the police who eventually said he died in custody. But there is the need to inquire into the circumstances surrounding Adikwu’s mysterious death.

“Suspicion arose when police arraigned other suspects without Adikwu whom others suspects said in their statements to the police, not only masterminded the robbery but was also in possession of the proceeds of the robbery which saw several banks freely robbed for hours, a police station attacked with scores of people, including police officers killed, and huge sums of money robbed and police arms carted away.

“The police had all along remained silent to questions about the whereabouts of Adikwu, with many out rightly accusing the police of murdering the prime suspect with a view to converting the proceeds of crime, including cash which ought to be exhibits during the trial.

“Now that the police have eventually admitted that Adikwu is dead, and considering the widespread suspicion that the police may have murdered him, NOPRIN calls on the President who is the operational head of the police to order an inquiry into the circumstances surrounding Adikwu’s suspicious death in police custody. The police should also be made to account fully for the cash and other exhibits recovered from Adikwu.”