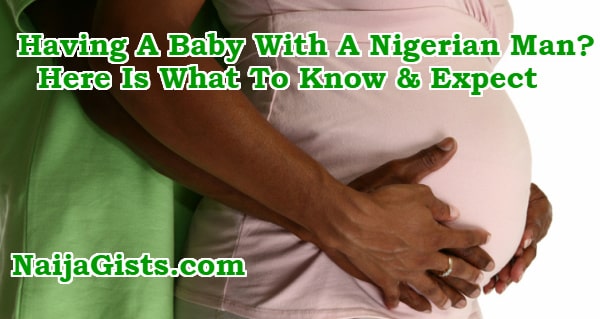 This article was written to address a growing trend among African American women.

These women are now getting “belle” for Nigerian men especially those from the Yoruba tribe.

One of them wrote NaijaGists.com last week, seeking for ways to handle her out of wedlock pregnancy for her Yoruba lover.

We hope this article addresses her concern and that of others in her shoes.

Having A Baby With A Nigerian Man: What To Know And Expect

Getting pregnant outside of marriage is most often not planned for obvious reasons. Being a single parent is not an easy task, as solely shouldering the physical and emotional responsibility of parenting is hard work.

Quite frankly, Single motherhood ends up being the story of many young ladies in the Nigerian society, who get pregnant outside of marriage. However, there are those unique cases which turn out just fine at the end of the day; where pregnancy eventually results in a marriage proposal or shared responsibilities among both parties involved.

The Nigerian society has gradually become open to the idea of unmarried ladies getting pregnant and raising their kids with or without the father. Birthing children outside of marriage seems to have become a common trend in the Nigerian society.

Here are a few questions to ask when you are pregnant for a Nigerian man and things to expect.

What Kind Of Relationship Do You Have?

You should probably ask yourself the definition of your relationship with the Nigerian man whom you are pregnant for. This is very important because getting pregnant is definitely not a sure way to get him to propose or even assume his responsibility as a father. If there was a serious relationship prior to the pregnancy which would eventually have resulted in marriage then you are in luck, you may get a proposal earlier than expected.

It is wise that you properly define the kind of relationship you find yourself in. You may assume everything in your relationship will naturally lead to marriage and a Nigerian man may have other plans in mind which most likely have nothing to do with marriage or maybe just not with you.

Let Him Know And Let His Family Be Informed

First of all you should realize that abortion is not an option; no need making hasty decision only to regret them later. When you realize you are pregnant for a Nigerian man you should let him know. Planned or unplanned he should be as involved as you are and therefore should have a say. Now this will determine what your fate is going to be.

If it was planned then he probably may propose; some Nigerian men require that the woman they intend to marry be pregnant first before further wedding arrangements can be made. If the relationship has been gradually moving towards marriage, and you end up pregnant then usually the families of the man and woman arrange a hasty wedding; If either of these two scenarios is the case for you, then it’s a rather straight forward one.

If that is not the case, then insist that his family gets to know what’s going on. Even if he doesn’t propose marriage, most Nigerian men will assume the responsibility of fatherhood. Nigerian men in general, are known to accept their kids within and outside of marriage. If he is a Yoruba man, the family most likely will also accept and acknowledge the child. They may not necessarily accept you as his bride but your child will be accepted.

Do I Get A Marriage Proposal?

The truth is getting a marriage proposal just because you are pregnant for a Nigerian man is not guaranteed. The single unavailable Nigerian male probably already has other baby mama’s, meaning you are not the first woman to be pregnant for him and you may very well not be the last.

Being pregnant for an already married man or one who is almost hitched, may result in you becoming a kept woman not necessarily marriage. So if your purpose for getting pregnant was to force him into marriage, then you should know that trick hardly works on most Nigerian men.

Some honorable Nigerian men may feel obligated to propose, but others will most likely offer to take care of the child. If he will offer marriage is only a question of character. In a few cases, some tribes like the Igbo may insist a woman be pregnant before marriage rites are performed. The reason being that the Igbo have a traditional marriage custom which requires the payment of bride price by the man, the amount paid is rather high. For this reason, some men would want to make sure of the woman’s fertility hence, the pregnancy request.

But once again Nigerian men have no problem fathering children out of wedlock so don’t get your hopes up.

Do I Get Child Support

The laws within Nigeria and Africa in general with regards to child care are completely different from other parts of the world. If a Nigerian man chooses not to send child support for his kid, you may not necessarily be able to force him to perform these duties.

Most Nigerian men are all about respect and family values so the only solution may be to table the case before the people he respects in his family and they are sure to come up with a solution which he would have to adhere to. This is why it is important to know his family.

Get A Means of Income

Just to be on the safe side have a plan for your life and that of your child. Have a means through which you can provide for yourself and your child should unforeseen complications arise. There are always exceptions to the rules, as some Nigerian men may discontinue all contact should you be pregnant with their child. Some may even go as far as denying ever having any such contact with you. Unfortunate circumstances may also occur whatever the case may be, be financially and emotionally ready to face single motherhood and its responsibilities.

The temptation to deny the father access to his child as a means of punishment for not proposing should not be entertained. Every child is entitled to both parents; don’t deny your child that privilege. If a Nigerian man wants to get to know his child then give him that chance. Once he is not a danger to the child, let him have the opportunity to bond as well.

Don’t Hang On Because Of Your Child

Having a child for a Nigerian man automatically ties you to him for a long time not necessarily in marriage though. Should it turn out that the man wants to get to know his child and nothing more, let it be and don’t force it. You both had a child together but understand when there is nothing more for you and move on with your life.

No law states that you have to permanently put your life on hold waiting for the father of child to realize he wants you as well; that may never be. He may just want a relationship with his child and his child alone. Read the signs and know when to let go.

Don’t Accept His Proposal Because You Are Pregnant

Don’t be too hasty in accepting a proposal because you are pregnant. Being pregnant for a Nigerian man and receiving a proposal from him can be quite a relief; since it saves you for being a single mother and the judgment of society. The temptation to say yes and be done with it will definitely be high; being that as a single mother, your chances in the relationship market may thin out a little bit, but try to think objectively.

If the marriage is solely for the sake of your child having a home, then the marriage may encounter problems in the future since it was built on the wrong things. If you do not think the man will make a good husband or being married to him feels wrong, be strong enough to say NO. Sometimes, the father of the child may not be the best match for you. So do your child a favor and carefully consider the kind of future your marriage would subject him/her to should you accept.

Don’t Be A Second Option

Have enough dignity and self respect not to become a second wife. If you turn out to be pregnant for a married Nigerian man, do try not to complicate matters by accepting to marry him or requesting he let his family go and start a new one with you. If you are not worried about yourself, then consider the safety and the future of your child.

Your situation may be different from the scenarios stated here, but however the case may be, your final decision should be made on the basis of what is best for you as well as your child.

Following the old school process of marriage and then pregnancy is sometimes the best thing after all said and done. But do be strong, take things one step at a time and I wish you well.

Are you pregnant for a Nigerian man or do you know more about Nigerian men and out of wedlock pregnancy? Do well to share your experience in the comment box below.