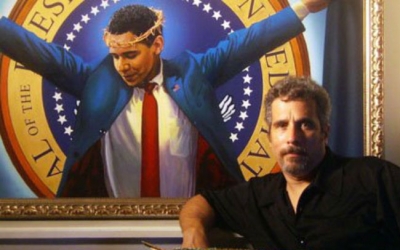 A very blasphemous painting, poster of President Obama as Jesus Christ Crucified called The Truth which displays the US President with a crown of thorns and arms nailed to the cross has sparked public outrage. naijagists.com

The artist identified as Mr D’Antuono had his exhibition event cancelled in New York after a serious blasphemy accusation from the public.

The artist whose exhibition was cancelled 4 years ago is out with a new President Obama as Jesus painting but in this piece, the President is shown wearing a suit and red tie with his arms outstretched.But instead of actually being nailed  to a cross like Jesus, Mr Obama’s arms are extended drawing back a blue  curtain. He has a crown of thorns resting on his head.

Artist Michael Dantuono was allowed to display his exhibit this year.

Are you in any way offended by this painting?