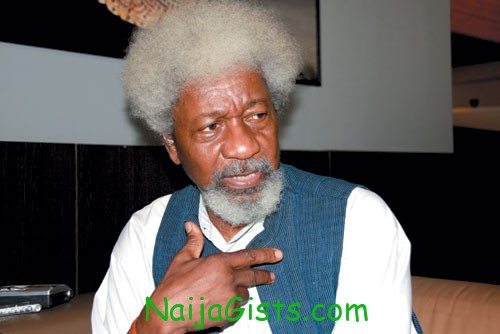 Soyinka informed the organisers before he travelled to South Africa about his inability to obtain a South African visa and they promised that a visa would be waiting for him at the airport on arrival.

In a letter to explain the situation, Prof. Soyinka noted that “It is true that I did leave Nigeria without a visa, owing to circumstances which I need not narrate at the moment. It is also equally true, however, that I telephoned the organisers of the Mandela event about the situation, and was assured that a visa would be waiting for me at the airport.”

But he was on arrival at the Johannesburg International Airport informed by the Immigration officers “that the regulations which permitted such an arrangement had been overtaken by a new legislation that was two weeks old. Evidently, the organisers were unaware of that very recent impediment. It would require a more senior officer, I was told, to review the situation and take a decision.”

Soyinka had to wait at the airport. He was later told he would be allowed in on three conditions: payment of the visa cost, a fine, and a refundable deposit. But the story soon changed.

He said: “I agreed to all these conditions. The senior officer who would execute these procedures reported for duty two hours later and I companied her to her office. We went through the preliminaries and a call was put through to the head office in Pretoria. I was handed the telephone, interrogated by someone. I explained what had happened, who had invited me and for what etc. etc. Finally, after an incredible wait of some more hours, I was informed by the same Johannesburg officer that I had been refused entry. This was despite a letter that had been demanded and faxed to Pretoria from the Institute affirming the status of my invitation.”

He waited for over eight hours before he was told that his entry was formally denied. The playwright said that ” is not my idea of decent conduct towards one who is not an unknown to South African officials, has made several ‘regularized’ visits in the past, and has indeed been invited to the country on this occasion to do honour to the founding father of the modern South African nation.”

He decided to take the next available flight out and was on his way to board a flight out when an immigration official ran after the professor and informed him of the decision to let him in.

Mandela’s wife was said to have been the brain behind the change of heart. Soyinka said: “Regarding how the matter was resolved, it is significant that it took intervention from quite high up, but outside the Immigration setup to compel those officials to rescind their decision to do what they should have done in the first place. In other words, the mechanism – even within the regulations – existed for dealing with an irregular situation, but those who possessed the authority and the responsibility to apply their discretion, chose to exercise it negatively, and only after taking several hours to weigh the merits or demerits of the situation!”