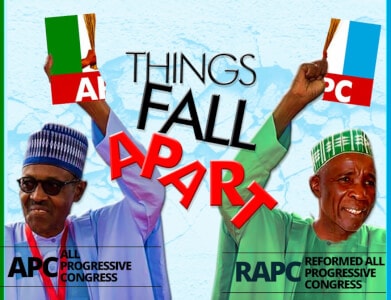 RAPC Group Threatens To Impeach Buhari, Says APC Visions & Values Have Been Thrown To The Dustbin

Mr Galadima told journalists that as chairman of the group, he could give directive to the majority members of the National Assembly to begin process for the impeachment of President Muhammadu Buhari.

“I want to say that today, as I sit here, if I give a directive to our members in the National Assembly to impeach for constitutional infractions, it would be carried out because we have that majority,” he said.

Mr Galadima said contrary to a statement made by the APC national chairman, Adams Oshiomhole, that the people behind the rAPC were inconsequential, it was those opposed to them that lacked integrity and honesty.

“On that side, there is no man of integrity and honesty as Buba Galadima. Those of us that had sacrificed our sweat and blood cannot sit idly and watch these values destroyed. This is the beginning of what is called crisis in the party.

“We believe that all the values and visions of APC have been thrown to the dustbin.

“Nigerians from all works of life have shown solidarity with us. For those who said that they are not losing sleep, why are they scampering to the National Assembly to beg cap in hand?”

Continue Reading
You may also like...
Related Topics:Buhari, impeach, rapc