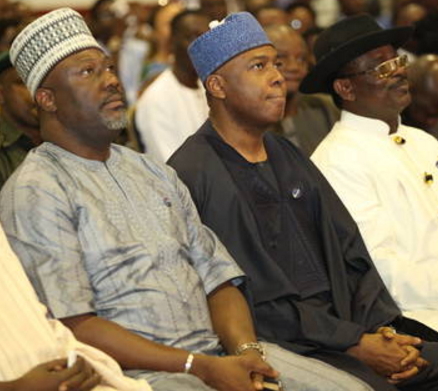 According to The Nation, Deputy Senate President, Ekweremadu, fired the first shot when he drew the attention of his colleagues to a three page advertorial by the Attorney General and Commissioner for Justice, Kogi State, Ibrahim Sanni Muhammed disparaging his (Ekweremadu’s) contribution on the recall process.

Muhammed noted in the advertorial that Ekweremadu’s submission that Melaye’s recall was an exercise in futility was made in bad faith.

“They are just wasting precious time because the constitution is clear on what should happen. It is possible that the attorney general of Kogi has not advised them properly. If he had done that, I am sure they would have applied their time to more meaningful ventures in the state. The process of recall is the equivalent of impeachment of executive positions.”

The Attorney General signed off his advertorial by saying “Finally, I must put on record that contrary to the legal opinion of Senator Ekweremadu on the role of the Senate in the recall process, the Senate has no role whatsoever in the recall exercise than to receive the Certificate under the hand of the Chairman of INEC stating that the provisions 69 of the Constitution have been complied with: See Sections 68(h) and 69 of the 1999 Constitution (as amended).”

Muhammed added that “Indeed by the provisions of the INEC regulations for the recall of a legislator, a legislator stands recalled upon INEC’s confirmation of a majority vote in favour of the recall.”

But Ekweremadu who came under Order 43 (personal explanation) of the Senate standing rule insisted that the Muhammed was ill informed and should have advised those behind the recall process how near impossible it is to recall a member of the National Assembly.

He noted that contrary to the position of the Kogi chief law officer, the Senate has a major role to play in the recall of senator and in fact final say in the recall process.

Ekweremadu said: “This morning my attention was drawn to a three page advertorial by AG of Kogi State (in a national newspaper.)
“He (attorney general) was responding to my contribution on the floor of the Senate when Senator Melaye informed the house of his constituents’ effort to recall him.
“I urged them to apply their time to more useful venture in view of the strenuous nature of the recall process and I said the AG may not have advised them properly.
“I understand that every page (of the advert) costs about 700,000 and five other papers carried the advert and we are talking of about N12m of Kogi money sent.
“I would have ignored him but because of his statement in the final paragraph stating that “I must put on record that contrary to the legal opinion of Sen. Ekweremadu on the role of the Senate in recall process, the Senate has no role whatsoever in the recall exercise than to receive the certificate from the Chairman of INEC stating that the provisions of Section 69 of the Constitution has been complied with.

“Indeed by the provisions of the INEC regulation for the recall of a legislator, a legislator stands recalled upon INEC’s confirmation of a majority vote in favour of the recall.
“He is saying that the Senate has no role. I stand by what I said the other day and I would like to take him to Section 68(1H) and (2) show the role of the senate, which he says has no role.

“Section 68(1H) reads, “ the President of the Senate or, as the case may be, the Speaker of the House of Representatives receives a certificate under the hand of the Chairman of the Independent National Electoral Commission stating that the provisions of section 69 of this Constitution have been complied with in respect of the recall of that member.

“I don’t know how he came to conclusion that we don’t have a role. I stand by my position. So, I pity the people of Kogi that hired this type AG. It is unfortunate that we are paying a public servant and he is unable to do a simple work of looking at the constitution.

“So, for him not to know about it I don’t know where he went to law schools anyway, because if he has been properly educated, he would have been conversant with the basic provisions of the constitution.
“I also don’t know his age at the bar but I believe I am his senior at the bar and I expect him to show some respect to his senior because that is what we were taught at the law school.

“For the avoidance of doubt, I also believe I have better credentials than himself in the legal profession.
“I was a teacher and my specialization was Constitutional law. I also practiced law.
“I have a doctorate degree in law and my interest is also Constitutional Law.
“I am also the Chairman Constitution review committee of this National Assembly since 2010. So, if I am taking about the constitution, I know what I am talking about.
“I expect the Ag, instead of him displaying his ignorance to simply call me and I will educate him on the correct position of the law.
“So I take exception to this and I believe that he needs to refund the amount spent on this to the people of Kogi.
“So I call on the Kogi House of Assembly to institute an inquiry on who paid for this and find a way of getting the money back to pay the salaries of the people of Kogi state.
“Kogi should constitute an enquiry to know who paid the money.”

Senate President, Abubakar Bukola Saraki who did not allow any debate on the issue concurred with Ekweremadu.

Saraki said, “The Deputy President of the Senate came under Order 43 and according to our rules it cannot be further debated, but honestly I am concerned with the caliber of people holding very senior position.

“Even those of us who only have association with the legal profession by being married to one but we have learnt over the years to know that this is straight forward.
“What is even more disturbing and irresponsible is how you can spend N10 million on advert. I have been a governor, when you file money for advert it is a difficult issue.

“This pretty much shows that government is truly is behind the entire process, when a government can go about and take an advert on an issue like this.

“There is a need for people on appointed or elected to positions to show some level of responsibility.
“This is a very simple matter in the constitution. You did not write it neither did you invent it, so DSP, you were just reading it as it.

“As you said it is very unfortunate for the people of Kogi State,” Saraki stated.