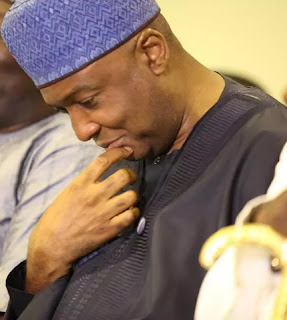 CCT Chairman, Danladi Umar, yesterday told the Senate President, Senator Bukola Saraki, that irrespective of the delay tactic employed by his lawyers, he will face the full consequences of the charges of false declaration of assets brought against him by the Federal Government.

Meanwhile, Umar at his closing remarks before the adjournment yesterday said that if he had his way, he would have advocated for the return of Decree Number 2 of 1984, to curb the alleged excesses of journalists in the country.

Umar, who noted that some journalists have been reporting what did not happen at the tribunal, said that such journalists should be punished for publishing falsehood. Umar’s said that his position was informed by last week’s publication in some newspapers that the tribunal had adjourned the trial of the Senate President indefinitely.

He said. “If I have my way, I would bring back the Decree 2 of the olden days to take care of the irresponsible journalists in this country.

“How can they dare to publish that we have adjourned the trial of this defendant (Saraki) indefinitely? It is the highest point of irresponsible journalism but I thank God for them that we are in a democratic era and that is why they are doing what they are doing now.”

Danladi had earlier reacted to an allegation of delay tactics by the prosecution counsel, Rotimi Jacobs, SAN against Saraki’s lawyer. Just before the prosecution counsel, Paul Usoro, SAN began the further cross examination of the Prosecution Witness, Michael Wetkas, Umar cut in, stating that that he had taken note of the delay tactics being employed by the defence counsel and warned that the tactics would not in way affect the consequences of the trial of the defendant.

According to him:”I am not happy at the delay tactics by the defence counsel. And I must say this thing out that this delay tactics will not reduce the consequences the defendant will meet from this tribunal at the end of the trial.” Lead counsel to Saraki, Kanu Agabi SAN however asked the chairman on what he meant by the consequences of the tribunal, adding that he and his client are worried over “assumed prejudices”.

He ,however, cautioned the tribunal against influence from opposition and enemies, adding that the defence team was against “assumed prejudices” as it is against justice. According to him, “From defence side, we are not worried about the law and facts that will be placed before this tribunal by the prosecution.

But we are worried about enemies who may wish to use this tribunal to achieve their ulterior motive. “As the tribunal chairman, we love you, we respect you, but we are afraid of consequences, especially as just stated by this tribunal this morning. Our fears have been reinforced, but we pray against consequences that are against natural justice.” Umar responded,

“When you are asking a witness, go straight to the point. You don’t have to find your way of distorting the witness. This is delaying us. You are a senior lawyer. I don’ t want you to do that kind of tactics to delay the matter. We assure you that whatever happens, we are going to be fair. “But it seems you are employing tactical delay to avoid final consequences. “Don’t be afraid. I’m a gentleman.” Agabi further responded, “We are actually afraid of the final consequences.”