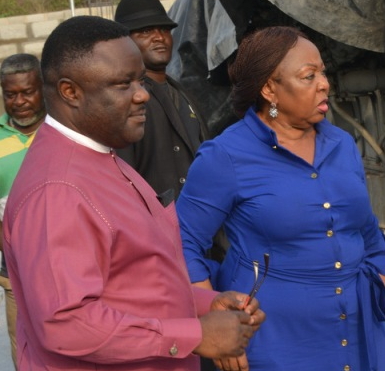 Senator Ita Giwa on Monday raised an alarm over her life.

In a chat with The Nation, Ita Giwa alleged that Governor Ayade has been sponsoring demonstrations against her, because of her insistence on the probe of relief materials for some displaced people of Bakasssi.

“Almost all my life I had been agitating on the issue of Bakassi and most times I have been at loggerhead with the past governors over the issue. But in all my life through out this struggle, no governor, Donald Duke and Liyel Imoke, ever organised, or incited some people against me,thereby threatening my life and my wellbeing.

“No government has tried to gag us, neither has any governor picked its employees to organise demonstrations against me. If anybody organises any demonstration against any individual, you have put that person’s life at risk.”

A statement by the Chief Press Secretary to governor, Christian Ita, accused Ita-Giwa of attempting to divert attention from counter-claim by some indigenes of Bakassi accusing her of age-long diversion of materials and the resettlement fund meant for the rehabilitation of the people.

“Last Christmas, the governor sent 300 bags of rice and other items to the displaced people of Bakassi. Because it was channeled through her, nobody heard anything about it.”

The statement added that her grouse this time is that the relief materials were not channeled through her, “hence the heavens must fall.”

“It is instructive to state that following her allegation, the Department of State Services (DSS) swung into action and after a thorough investigation, concluded that the former presidential adviser could not substantiate her claim. This rendered her false accusation useless.”

It said by the outcome of the DSS investigation, Senator Ita-Giwa has publicly embarrassed herself.

While describing the entire episode as unfortunate, the statement said it was however, not surprising by the “antics of Ita-Giwa who once boasted that she uses the media and the Police whenever she seeks relevance.”

Olumide Odimayo Ojo Aka Londoner Is Dead: APC Politician Killed By Kidnappers In Ondo
Political Nomad Obanikoro Defects To The APC Party To Escape Justice In The Face Of Corruption