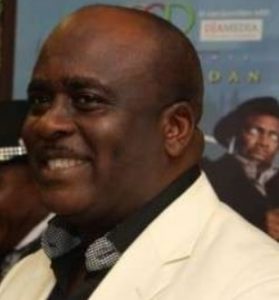 Nollywood actor Sola Fosudo who bagged an award at the National Theater Iganmu Lagos few weeks ago in a recent encounter with City People Reporter Gbolahan Adetayo narrated how his career started back in 1980 at OAU where Soyinka mentored him to success.

He also released interesting details which fans can not afford to miss about him.

How did you feel after winning a Legendary Award today?

Well, I feel honoured and recognized. I also feel humbled because there are many of us who joined the industry almost the same time, and for me to be picked among the awardees of Legend of Nollywood, it is a great honour.

Can you take us through how the whole journey started?

Well, that is a long story but everything that man does, is in the hands of God. I believe that my talent would have first be noticed when I was in primary school, even throughout my secondary school days; I was participating in all the school drama until I went to the University of Ife, now known as Obafemi Awolowo University in 1980. That was when I started.

Who actually brought you into Nollywood?

I will attribute that to God almighty. But I didn’t train in Nollywood. I studied theater arts and I have so many mentors starting from Professor Wole Soyinka, Professor Adelugba and many other professors as my role model. I am not a Nollywood person.

What do you think the industry has done wrong which is affecting the practitioners at the moment?

It is good to have a lot of people around you. If an industry doesn’t have enough people to sustain it, obviously the industry will perish. So, I think we should thank God that there are so many people coming into it. That is one of the things that have been sustaining it. But what we need to do to encourage them is that, most of the new acts should be encouraged to go for training. They should go to acting school. But the fact that people are coming in is a good development. Acting is people’s trade.

What really prompted you before chosen acting above other professions?

How do you marry your job as a lecturer with acting?

It is about scheduling of time. If I am teaching, I can’t be recording at the same time. I always fix my movement with the producer or director so that he will have an idea about when I will arrive at the location. So, there is no clash between the two.

There are no challenges. When God takes you into something, he will also see you through it. I believe that every profession has its own challenges, so to speak. So, there is no special challenge that I can think of in a very special way. Apart from the normal national challenges that we face in the industry. No electricity, bad roads and all that but away from that, God is in charge.

You features more in TV series than home videos, why the choice of that?

It is still base on the time factor we are talking about. TV series is still more flexible in times of managing my time with them. Sometimes, I tell them I will be coming by weekend and that is exactly when they will shoot my own beat. But if you want to go for a movie location, they may not even do it in Lagos. It may be at Enugu or others, and I will definitely not have the time because of my teaching.

What inspires the kind of movie you take part in?

Continue Reading
You may also like...
Related Topics:interview, sola fosudo