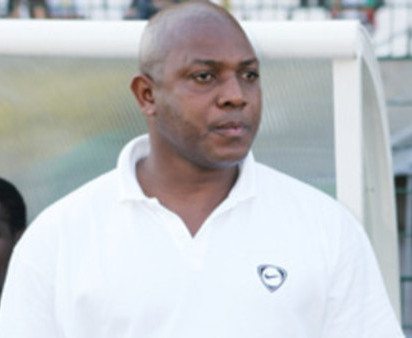 After Going through the list of players the Nigeria Football Federation invited for the Botswana and Zambia friendly matches Stephen Keshi wore a little long face.

The invite had been dispatched to the players before he was signed on as the new eagles head coach. Out of 22 players only one is based in Nigeria. He says that’s not the approach he will accommodate if he has to rebuild the Eagles. He quickly asked questions and invited Jude Aneke, the current leading scorer in the Nigerian Premier League.

It was by mere coincidence that Osaze Odewengie was at the same time withdrawing from the two assignments.

Keshi had never seen Aneke play but he wondered how a player who has netted 20 goals in the league in a season would, in the first place, be left out of the national team.

“It’s not possible that such a player is left out of the national team. I’ll invite him immediately,” he said 24 hours before the federation announced the inclusion of Aneke as a replacement for Osaze on Monday. But for time he would have invited more local players. One or two may not even be ruled out before the Kaduna match with Zambia.

“If we must get it right we must begin to build from home,” Keshi said yesterday shortly after reporting to the camp in Abuja. The Eagles will train there for two days before flying to Benin on Friday. They will begin today. Keshi said further:

“My plan is to have only about 10 to 12 foreign-based players for matches. The rest will be home-based players. The idea of inviting 20 foreign-based players for a match is not ideal to me if we have to develop our players. I will begin gradually to increase the number of local players in the national team. And with time, I think, we will have many of them playing matches. I intend to pursue a programme that will give us a new face. And my focus will be on local players. This is no lip-service. I mean business. It’s not proper that we neglect our league.

There must be a change. It may take time but we must begin to do something. The good thing is that I have colleagues who are equal to the task. Sylvanus Okpala, Daniel Amokachi, Ike Shorunmu and Revelino Valere are coaches any one should be proud to work with. We will be on duty to change things.

Eagles will play Botswana in Benin this Saturday and will face Zambia in Kaduna on Tuesday.