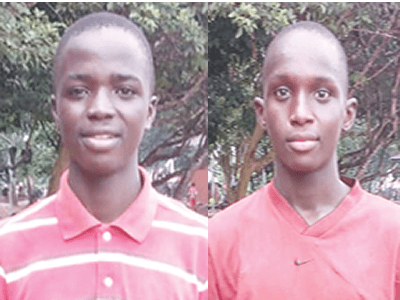 Meet Ali Marcus, Ibrahim Nathan and one Ayuba John (photo not available) who escaped after being captured by the dread Boko Haram sect.

After weeks of living at the terror camps, God made a way of escape for them.

In this chat with Ehiosun Ojieva at an IDPs camp in Ovia NE LGA of Edo state, the trio  who are undergraduates of the University of Benin and Edo State University Iyamho gave vivid accounts of how God delivered them.

Nathan Ibrahim: My dad won’t see me become a graduate

My name is Nathan Ibrahim; I’m 19 years old from Gwoza in Borno State. I was admitted to study Law at the Edo University, Iyamho. I’m the eldest of five kids of my parents. It is very unfortunate that I lost my father in one of the deadly attacks of the insurgents leaving me and my four siblings in the care of his mother who had it tough coping with taking adequate care of our needs.

In search of security and safety, I sojourned to Abuja where I fell into the trap of a fraudster who promised to sponsor my education only for me to discover that they are bad people looking for someone to use for rituals; throughout my stay with them, their character was quite strange. Only God knows what would have happened to me if the evil had achieved their aim. Actually, I had a bitter experience with them; it was just God that saved our lives from their hands. My only regrets are that I don’t know the whereabouts of my other siblings and my father did not live to see me become a graduate.

John Ayuba: My parents abandoned us because we were all faced with death

I’m John Ayuba, 20 years old from Borno State. It was by His divine grace that I survived Boko Haram attack. For months I was in their camp waiting for a day of execution but I cannot explain how God saved my life from their hands. In my presence I saw people being killed like cows without mercy. When they attacked my village, my parents ran and abandoned us because we were all faced with dead threat after they eliminated a whole family who were our close neighbours. Seeing death face to face, everybody ran for their lives. So, when I escaped from their camp, I was moving from one place to the other in search of safety.

I will not forget in a hurry one harrowing experience: while escaping from the insurgents’ onslaught I came face-to-face with another batch of terror gangsters, they shot indiscriminately at me with all the bullets missing me by divine intervention. I can remember while attempting to escape, I jumped over a fence and the whole structure fell on me.

It was a bitter experience for us; it is not a thing for anyone to experience but all the same, I thank God that I’m alive today to tell the story. I also recollect one occasion when as we were escaping the terrorists came after us contaminating the nearby streams and rivers so that we will not have good water to drink.

Most time the soldiers that were posted to our locality to provide security were overpowered by the insurgents and in their bid to escape they pull off their uniforms and beg us to give them our clothes with which they disguised. I’m very elated that I found myself in Benin where I was taken to IDP camp. Today I’m an undergraduate recently admitted to study Business Administration at the University of Benin.

Ali Marcus: Studying Medicine and Surgery is beyond my imagination

I actually do not want to recount my experiences with the insurgents that took over the whole of Borno State. I was 17 years old but what I saw, a 60-year-old man would not have seen because of the situation in Borno. Life was so bad for me that I wanted to kill myself having seen what Boko Haram did to our people.

To cut the long story short, I want to thank God that he did not leave me to fall victim of untimely death. Each time I recall how these people killed my brothers and sisters in cold blood, I fall down and cry. People living in the West and Southern part of this country are living in heaven on earth. They do not know what God has done for them.

If a prophet had told me four years ago that I would be at the university studying Medicine and Surgery, I would call the prophet a liar, but today my joy is that I’m gradually actualising my dream. The trio asserted that their coming to the IDPs camp in Uhogua has made a big change in their lives giving kudos to Pastor Solomon Folorunsho, the Camp Commandant, for his fatherly love and care.

“Our big daddy Pastor Solomon Folorunsho is always encouraging us, motivating us and praying for us to attain unimaginable heights. We appreciate him very much for making all the kids in the camp to have the benefit of free education through free books, free tuition, free feeding and free uniforms,” they said.

Mrs. Evelyn Omigie, a care giver at the camp, gave thanks to God who made it possible for the youngsters to have a safe haven in the camp. “I give kudos to my pastor, Solomon Folorunsho, for the passion he has for the less privileged which made him to set up the camp,” she said