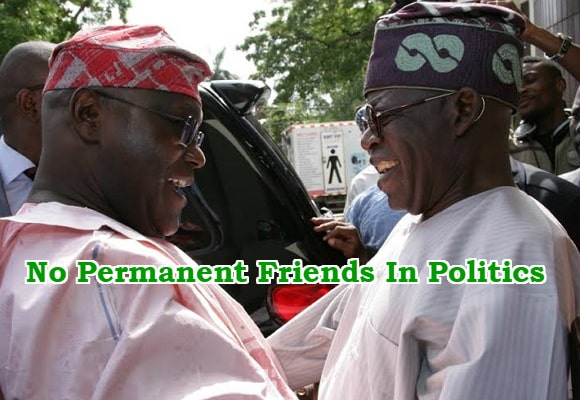 The All Progressives Congress National Leader, Bola Tinubu, yesterday said that President Muhammadu Buhari’s trustworthiness is what distinguishes him as the candidate to beat in the 2019 presidential elections.

Tinubu argued that the character of the two presidential candidate front runners — President Buhari and ex-VP Atiku Abubakar — could not be more distinct.

“When Buhari says ‘yes’ or ‘no,’ you know where he stands. He means what he says, no more, no less. “With Atiku, things are more nuanced. This shows he has no vision for the nation except the naked pursuit of power for the naked use of that power,” Tinubu said.

Speaking in Lagos on Tuesday via a statement by his Media Officer, Mr. Tunde Rahman, the ex-Governor also assured President Muhammadu Buhari that the party’s campaign council has accepted the assignment given to it by the President and would work for the country.

“We accept President Buhari’s Assignment,” Tinubu said in a statement by his Media Officer, Mr. Tunde Rahman, in Lagos, noting that the council would not let President Buhari down. Tinubu, also the Co-Chair of the party’s Presidential Campaign Council, said that letting Buhari down would also let down the nation.

The APC National Leader said that Atiku had his chance to shine as Vice-President when he controlled the privatisation programme of the Obasanjo government.

According to Tinubu, Atiku abused this assignment and helped squander billions of dollars on power generation that did nothing but extended the nation’s darkness.

“We should not reward him by giving him another eight years “As the PDP candidate, he is now the leader of an avaricious horde that seeks to reattach its mandible once again to the public wealth and forever lay siege to our nation’s future.

“Nigerians will do well not to pay them any attention,” he said.

Continue Reading
You may also like...
Related Topics:Atiku, thief, tinubu