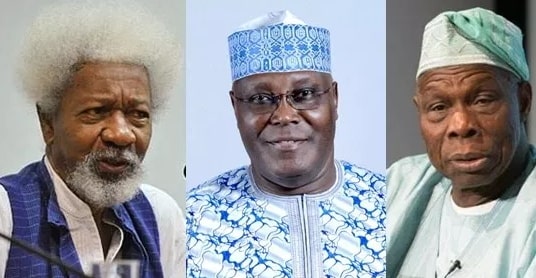 Soyinka Warns Nigerians Against Obasanjo‘s Double Standard, Accuses Him Of Supporting ‘A Devil’ As Nigeria’s President

Soyinka has attacked former President Olusegun Obasanjo again, saying he is supporting a man he called ‘a devil’ several years ago to become Nigeria’s president.

The Nobel Laureate who was a panelist at the event tagged, ‘Nigeria 2019: Countering Fake News,’ organised by BBC News, charged Nigerians to be wary of Obasanjo who pretended to be the conscience of the nation.

Though Soyinka did not mention names, but his utterances ostensibly refers to Obasanjo and his former Vice President and Presidential candidate of the Peoples Democratic Party, PDP, Atiku Abubakar.

Punch quoted Soyinka as saying that if the former leader had been referring to a certain person (Atiku) for eight years as a devil and is now telling Nigerians to vote for the devil, then there was a reason for Nigerians to express some doubt.

“We have got to develop a very healthy scepticism. If someone in a position of power for eight years has lectured a nation for eight years and after that continued year after year to continue to direct the minds of a whole nation in one direction, only saying ‘this is Lucifer from hell’ for eight years in office and several more years out of office, saying this is Lucifer and then one day he changed his left hand and says behold your redeemer, which of the two is fake news?”.

Continue Reading
You may also like...
Related Topics:Atiku, obasanjo, support

Tinubu Calls Atiku A Thief “He Squandered Billions Of Dollars On Fake Power Generation Contract “
Donald Trump Walks Out On Democrats During Meeting Over $5.6Billion US Mexico Border Wall