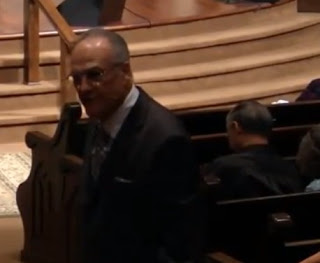 Many folks attend church to atone for sins and ask for forgiveness, but few expect to be called out and insulted in front of the entire congregation. Members of the Immanuel Baptist Church in Skiatook, Okla., found themselves the subject of a mid-sermon tirade by preacher Jim Standridge.

Caught on video, the fired-up man of God personally insulted churchgoers for otherwise minor indiscretions like dozing off and poor attendance, shouting at one man, “You’re one of the sorriest church members I have! You’re not worth 15 cents!” Although his anger may seem shocking, Standridge claims he’s received emails and letters of support from all over the country.

This is quite hilarious.