Posted on January 18, 2013 by Naija Gists Leave a comment 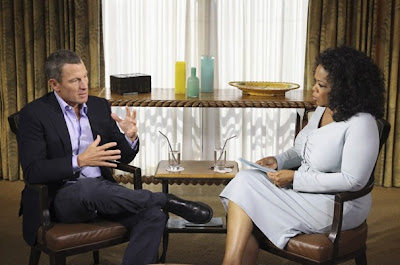 Lance Armstrong, a professional American road racing cyclist and a record breaking seven-time winner of Tour de France between 1999 and 2005 who was disqualified for allegedly using performance enhancing drugs has finally confessed on a live TV. naijagists.com

On Thursday night, Lance Armstrong confessed in a live interview with American talk show host, Oprah Winfrey that he actually used drugs to enhance his performance.

He said he started doping back in the mid-90’s.

Watch the video below and see the transcript after.

Below is the transcript of the interview and response from Lance Armstrong as Oprah queried him.

Oprah Winfrey: Did it feel wrong?

Oprah Winfrey:’‘Did you feel bad about it?”

Oprah Winfrey:”Did you feel in any way that you were cheating?”

”I went and looked up the definition of cheat. And the definition is to gain an advantage on a rival or foe. I  didn’t view it that way. I viewed it as a level playing field.”
”I’m not comfortable talking about other people,” Armstrong said. ”I don’t want to accuse anybody.”
”This story was so perfect for so long. It’s this myth, this perfect story, and it wasn’t true,”

Oprah Winfrey: Did that include the blood-booster EPO?
Lance Armstrong: ”Yes.”

Oprah Winfrey: Did he do blood doping and use transfusions?

Did he use testosterone, cortisone and human growth hormone?

Did he take banned substances or blood dope in all his Tour wins?

Oprah Winfrey: In your opinion is it humanly possible to win the Tour de France without doping seven times in a row? Oprah asked. Not in my opinion, Lance answered

Lance Armstrong: ”I deserve this,” he said ”It’s a major flaw, and it’s a guy who expected to get whatever he wanted and to control every outcome. And it’s inexcusable. And when I say there are people who will hear this and never forgive me, I understand that. I do. That defiance, that attitude, that arrogance, you cannot deny it.”

Oprah Winfrey:”Have you made peace?”

Lance Armstrong:”No,”because so many people have been hurt too badly, and a 40-minute (phone) conversation isn’t enough.”

According to sources, Lance Armstrong should be placed on suicide watch because after Thursday’s interview with Oprah Winfrey, he appeared suicidal and lost in thoughts.