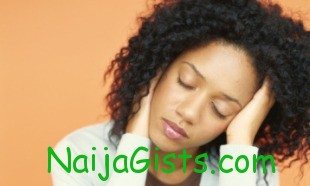 At exactly 10:30am, Rita stretched slowly. she felt so much pain in her head, her legs, in fact everywhere. It felt like she had been crushed by an elephant or even run over by a truck then in bits and pieces it all came back to her; last night, the shouts, her tears, his smiles and the beatings.

Tade! Oh God! she silently prayed he had left for work. she painstakenly opened her eyes, his keys were not on the table, his tuesday shoes she had polished the day before were missing and his briefcase wasn’t anywhere in sight.

she heaved a deep sigh of relief. He would have complained about her waking up this late and another argument would have ensued. She tried to move; the pain wouldn’t let her. She lay back still for a while and even though she tried so hard to forget, her mind played back the events of last night.

She had prepared his best dinner; Ofada rice with plantain and chicken. she even baked cup cakes. He loved her cakes, it was the reason they even met in the first place. He came home by 7:00pm everyday so she decided to wait for him so they would have dinner together. She had goodnews and she couldn’t wait to tell him. He was an hour late but she still waited, silently hoping this night would be different.

He finally came home around 11:45pm. He reeked of alcohol but he wasn’t drunk, still alcohol disgusted her and he knew that. Her father used to drink when she was much younger, the memories she tried to suppress as a child re-surfaced again. He went straight into their room; no hug, no explanation, not even a word. She wouldn’t cry; why did she even think tonight would be different? He didn’t deserve her tears anyway.

The food was cold so she headed to the kitchen to re-heat it. Minutes later she heard her name; shouting like a raged bull he entered the kitchen where she was clearing up, his face was stone cold. He wanted to know why she had cleared out his things from the top drawer and where she kept his other black socks. She quickly gathered her thoughts, “But Tade I told you I needed the space.

I’ve even arranged your things in the other drawer.” He said nothing so she continued, ” I’m not sure where Tutu kept your socks when she washed but I’ll go and check immediately I finish here“. She thought he would turn and walk out of the kitchen but he just stood there and then he spoke, “Rita! So Tutu is now my wife abi! Or did I pay Tutu’s bride price? Does she sleep in my bed? is Tutu even meant to be doing my laundry?! Ehn!” ” No, I just haven’t had the time to..” She didn’t even complete the statement when he slapped her.

She was shocked. It was obvious he was trying to pick a fight as usual. “Tade I just..” Another slap hit her across her cheek before she knew what was happening. “So now you talk back at me abi?!” He punched her in the face so hard she couldn’t scream. He continued and beat her again and again with a grin on his face like he was enjoying it. “I will teach you to be respectful” he repeated as he continued to beat her, he slammed her on the wall and called her names. She tried to fight back but it didn’t help, he only hit her harder and then he stopped. For a minute she thought the torture was over until he undid his fly and pulled down his trousers.

Holding his already erect penis in his hand, he shook it as he spoke, “this will remind you that I own you.” He slowly stroked himself and then roughly tore at her dress and her panties but she didn’t have the strength to move. He thrust into her again and again smiling and saying dirty things, he cupped her breasts hungrily and squeezed them like she was some cow he was milking, moaning with every thrust. She felt used and nauseous, tears ran down her cheeks and then everything went blank.

Rita sighed as she tried to stand. Her left shoulder hurt seriously. She had to get it checked out. She felt sore in between her thighs. She slowly moved to the dressing table, sat down and slowly turned to the mirror but she couldn’t look, she didn’t want to see. She knew she had a split lip, another black eye and probably a dislocated shoulder. She couldn’t go to the family doctor again; He was getting suspicious of her supposed numerous ‘falls’. Her parents were not an option. They worshiped Tade and cared less about her. why not?! He paid their bills. Her sister always talked about him, she dreamt of marrying a man like Tade and her best friend Nana was out of town. She couldn’t do this again. 2 years and he had become a beast. It was like he had an inner demon always ready to unleash itself at the slightest provocation. Not that she even provoked him. She always tried to be polite and she never argued with him. Never! Tade wasn’t like this when they got married, in fact he was the exact opposite of how he was now. he was intelligent, caring, romantic, funny and he never drank. He was the whole package, a perfect gentleman in every sense of the word. She snapped back to reality. This Tade no matter how much she tried to deny it was now her worst nightmare.

She pulled her overnight bag from the side of her drawer. She was leaving, she had to leave. She couldn’t do this again. Yes! marriage was for better or for worse but she wouldn’t let Tade be the death of her. She had nowhere to go but still she couldn’t stay here. She wouldn’t. Tade was going to kill her one day and she wasn’t going to sit around and wait for that to happen. She couldn’t lift the bag, Aliu would have to help. She tried to shout his name but all she could do was mouth the words, no sound came out. She picked up the receiver and mumbled a few words praying he would make sense of it.

Rita sat in the back seat of her car as Aliu drove out of the house; Tade’s Palace, her Prison. She placed her palm on her tummy and silently prayed that the little life growing in her was unhurt. She didn’t even look back. She had taken enough!

Many Nigerian women are abused by their husbands like this in modern times. Family members who are benefitaries of the husband’s generousity are blinded to the horror and never see wrong in it. They allow their daughters to continue to endure this animalistic behaviour.

Some women think they deserve to be abused because of their provocative nature but the truth is no woman deserves to be treated like an animal despite the temperament of her husband. The Christian society frowns against divorce and being a christian with strong values, I do too. But let’s be candid and ask ourselves: “for how long can these women keep up withthis form of abuse?” I personally don’t think I can endure such and neither should any woman.