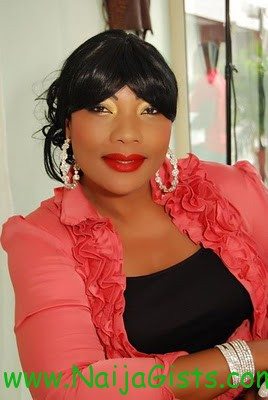 The sound of her name definitely strikes a chord in movie buffs on account of the superlative role interpretation by this sultry actress in the best seller movie Glamour Girls years back. But for some time now the screen diva Eucharia Anunobi aka UK has been off the scene and many have been wondering whether she has left the industry that gave her fame and fortune and what have you.

Recently News of the People’s GBOLAHAN ADETAYO caught up with the single mother of one at an event and the fair-complexioned Igbo lady opened up on her perceived absence from the movie scene.

Your face has been a bit scarce in movies nowadays, what’s happening?
It’s like this, if you have to prepare for anything good, then you’ll need a little bit of silence and peace. So, I guess I’ve been away from the social scene for a purpose. Let me use this opportunity to say that I’m back in school for my Masters in Social Work at the Lagos State University, (LASU).

Also, I’m using my time to continue preparation for the Work of God. You cannot understand the mysteries of the things of God if you are not silent or if you are always at a party scene. I realized that when you claim to be born again, it’s not for a joke but serious business. And it means that you have decided that you know God and that for you to propagate God, you will need to stay in silence for him to purify you, purge you and then bring you out for his purpose. So that’s what has kept me silent and I give God the glory for it.

What’s responsible for your sudden commitment to the things of God now?

I’d like you to rephrase the question because, I didn’t just start to serve God now; I have always been serving God. I have given my life to Christ for the past 15 years of my life; I took an altar call. Yes, there might be moment of feeling whereby you want to walk away from God, but the moment you make up your mind to follow him He will help you. The entire life that I have lived as a movie star has been spent doing the work of God. I’ve been using my roles to serve God. I might have acted some negative roles that I had been asked to play but I believe God, giving me fame, was preparing me to use that fame someday for His service.

How do you now correlate your claim of being born again for the past 15 years with the many nude roles you’ve played?

I have never acted nude and I will not say that anybody acts nude. In the context that I do understand, it’s all make-believe. That’s what acting is all about. We simulate things to make them look real so as to pass a message. When we talk about nudity, we are talking about exposing a private part of a person which defines his or her masculinity or feminity. No producer in his right senses will ever demand that you expose that. All we do is simulate by showing certain parts such as the back or back of your leg for instance and to me that is not nudity. Nudity is when you throw caution into the wind and exposes your private parts such as the genitals and I don’t think any right-thinking person will do that on camera. So doing the work of an actress does not stop you from serving God. Our job is helpful in passing a message to the public.

How far do you wish to go in your religious pursuit?

My dear no body can tell how far he or she wants to go in the things of God. All you ask for is God’s glory. But once you’ve decided to serve God, know that it is for the rest of your life.

Are you going to start a church, I mean pastor your own congregation?

It’s God that will lead and direct me. I never asked for this kind of commitment from him, but he chose me to commit me more to his work.

How do you get the physical motivation for all these; schooling, religion, parenting and others?

It’s God that strengthens me because he is the author and finisher of my faith. Also believe in good health. I take a lot of water and light food. You must help God to help you have a good health. You can’t be praying for good health and still continue in bad health habits. As an actress I must take my health seriously and look good, otherwise, no producer will employ me.

Has your style of acting changed?

I want to answer yes to that. There were some things that one must have done in the past as a youth which is called youthful exuberance and which I can no longer do at this stage. Even as a Christian, once in a while, one has one or two failings. I would like to recall one particular event during which I wore a particular dress, I don’t want to use the word regret, but I wish I never wore that dress. You cannot be working for God and be doing the wrong things. For me, those were some of the time of failings I was talking about. But then if you don’t fall, you cannot rise. And that is what God is looking for, a broken and a contrite heart. I still pray to God to help me never to fail him again. You know wearing that cloth that was unnecessarily revealing is not for the Children of God.

You are still attractive, so how do you handle male admirers who ask you out?

(Laughs) I handle them with compassion and diplomacy. I handle them with respect and friendship. People will always come to you for different reasons, but when they come in contact with you and you talk to them, their opinions might change and they become your friends. Those that are stubborn will go away.

As you go deeper into the things of God, don’t you think you need a new helpmate, since you separated from your former husband, or is there anyone already?

For now, I’m married to my God. He loves me and I love Him. When God decides that I should marry again, it will, definitely. I mean, He said in the Bible that it is not good for a person to stay single. I’m praying to God for that. I’m praying that a good man will locate me and see beyond my physical beauty but my inner person and the good woman that I am.

What are criteria for the right man?

We have to be in the same line. I’m looking for a spirit-filled man who is just like I’m getting filled spiritually. If a man doesn’t have the spirit of God in him and understands the words of God, he won’t have compassion and empathy for his wife. Of course, we all like to talk in the physical that we want a tall and handsome man, but I am looking for a handsome man from God’s perspective. A man who walks in the way of God, and is filled with His spirit and words all the time will never miss it. The Bible says that two cannot walk together unless they agree. Of course I want an educated man because as you can see, my education is increasing. So I can’t go for a carpenter. He must be somebody who’s following up his education too as much as I am.

Has there been any unpleasant story ever written about you in the press, that you really are not happy about?

I don’t see them as unpleasant but corrective measure. If the press writes some bad things about a star, then he or she should change. The only appeal I want to make to the press is that they should endeavour to write about the good things we are doing not only the bad things. That’s how I see it.

You’ve not really answered whether your style of acting will change henceforth?

OK, it will slightly change. I will no longer act any role which does not have any Godly message to pass. I won’t play a role just for the sake of glorifying moral decadence. Let me take you back, in the month of August, I did a movie which was about homosexualism and lesbianism. Over the years, that I have been acting, I have been given movie roles which I found were not passing any message other than glorifying the act itself, but believe me in August, that movie role came and when I opened the script the first two lines were shocking. I was like, excuse me. I said I wasn’t going to do this movie. The producer was calling me for six weeks begging and saying that he believed I was the right person for the role. I said God forbid. But after about six weeks, usually I would have dumped the script in a trash, but I don’t know what happened I still had it. I wasn’t feeling too well that time but I managed to pick up the script again and see what they were even talking about. I then discovered that ok, they seem to be talking about homsexualism and bisexualism, but the morale of the movie is about the confessions of these sinners and the character I was meant to play was that of a pastor. So I had to be part of it. The role of actors is to propagate God’s message.

I remember calling you almost this time last year, and the tone of your voice was that of grief when you told me that your son, Joshua, who has been battling with Sickle Cell Anaemia,  was hospitalised, how is he doing now?
I thank God for his life. God is the one taking good care of that boy for me. That’s all I can say to that. I know God has a purpose for his life and He will help my son achieve his purpose. Thank you for your concern.(News of the people)