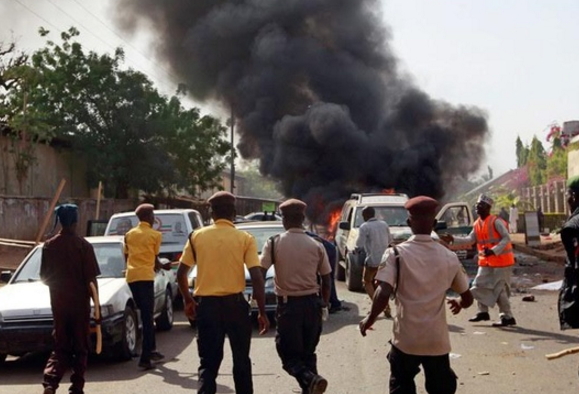 17 persons have been confirmed dead while 13 persons were injured in the multiple explosions that rocked Maiduguri, the Borno State Capital on Saturday night.

The Borno State Commissioner of Police, Damien Chukwu confirmed this at a press briefing on Monday.

Giving details, the CP explained that a male suicide bomber gained entry into the premises of the University of Maiduguri, and detonated a bomb (PBIED) strapped to his body, near the Rapid Response Services Office building.

According to him, the suicide bomber died while three of the university’s security personnel on duty were injured.

One of the injured security personnel, a female (whose identity was given as Becky Edubi), later died while being attended to at the University of Maiduguri Teaching Hospital.

The CP also noted that in another development at about 10:30 pm, four female suicide bombers infiltrated Zannari community in Gwange general area of Jere LGA.

Again, at about 4:00 am, another set of two female suicide bombers detonated PBIEDs within the University premises.

One of them was said to have been detonated close to the Entrepreneurship and Skill Acquisition Centre Complex, while the other was behind the Works Department complex.

EOD/SARS and patrol teams were mobilised to the scenes after which the dead and injured were evacuated to the University of Maiduguri Teaching Hospital.