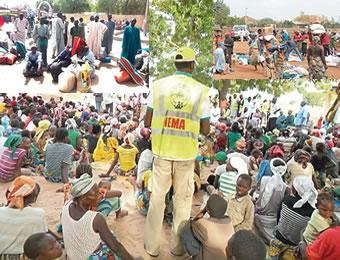 NEMA has discovered 22 Boko Haram members among Nigerians deported from Cameroun. The returnees were settled at the internally displaced persons (IDPs) camp in Mubi, Adamawa, State.

According to the News Agency of Nigeria (NAN), Director General of NEMA, Mr, Muhammad Sani Sidi, disclosed this at the 18th Safe Schools Initiative Technical Committee meeting yesterday in Abuja.

Sidi stated that the Boko Haram members were identified with a peculiar mark on their backs among the 12,000 Nigerians deported from Cameroun residing at the IDPs camp in Mubi.

He added that 90 per cent of the deported persons were from Borno State.

“The Camerounian government dumped 12,000 Nigerians at Mubi and we had to move them to transit camps and even open more camps to accommodate them.
“Ninety per cent of these returnees are from Borno State with a lot of Boko Haram elements among them.
“We arrested 22 of them yesterday, who were actually planning an attack, they were identified with a mark inscribed on their backs with hot iron in form of tattoos. The mark on their backs indicates that they are ready to die,’’ Sidi said.

He said there were 23 residential camps in Borno State and that the state government planned to open more as the number of displaced persons was increasing.

On the Safe School Initiative, Sidi commended the Adamawa team for recruiting 71 teachers to scale up education in IDPs’ camps.

He urged other state governors in the North-East to show commitment that safety and security of students were guaranteed before the team could rebuild the schools that were destroyed by insurgency.

In his address, Desk Officer, Safe School Initiative from Borno State, Mr. Baba Kalli, said almost all the schools in the state had been occupied by IDPs.

Kalli said NEMA had taken over the catering for 23 camps but that the problem persisted as population of the IDPs kept increasing.

He solicited for more assistance for all Borno indigenes while thanking donor agencies for their assistance so far.