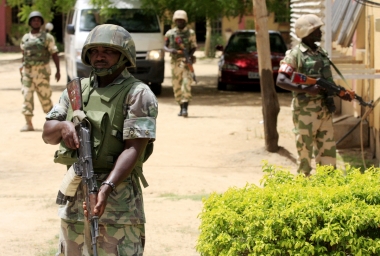 Vigilant troops of the Nigerian Army in Borno State, under the Operation Rescue Finale, have killed four female suicide bombers, while trying to detonate their Improvised Explosive Devices.

It was gathered that two of the bombers who wore hijab, attempted to break into the troops at their base in Limankara on Thursday at about 8am.

They were said to have been shot by troops when the bombers were asked to stop, but refused. The IED vests strapped on their bodies also reportedly exploded and the suicide bombers died.

It was learnt that at another troops’ base in Mafa, two other females were shot dead, while trying to detonate their explosives.

The last incident was at Galmeri village, where a female and a male suicide bombers were killed after attempting to sneak into the village.