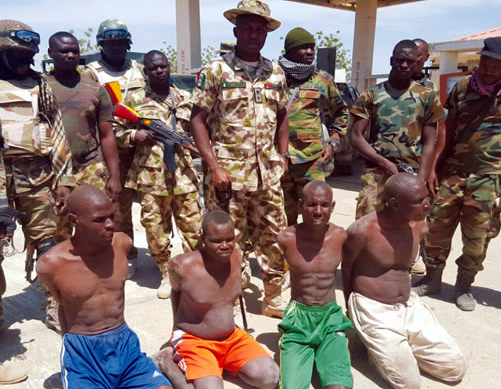 He gave the names of the suspects as Alhaji Madu, 56, Abur Goni- Bukar, Ibrahim Ali, Ayuba Duse and Haruna Bukar.

“The suspects were arrested after numerous operations in different parts of the North East; we are investigating before taking a decision,” he said.

The army officer said that the troops, on Jan. 27, arrested three suspected terrorists with bags of flour, groundnut and millet, which they were conveying to Jeram village.

“Again, on Jan. 28, our troops at Buni Gari apprehended five suspects with a truckload of gypsum, which is one of the components for making bombs,” Irabor said.

Seun Egbegbe & Robbery Gang Arrested For Stealing N10M From Hausas At Gbagada General Hospital
Man Strips, Hangs Himself On A Tree In Kano