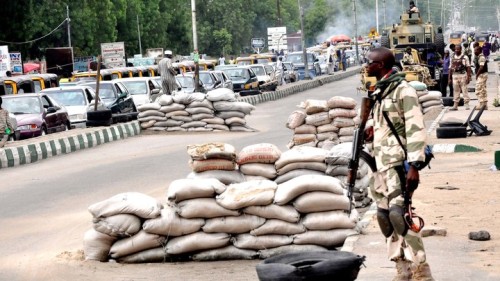 The terrorists had stormed the troops’ bases and police locations while most of the troops were out on patrol of surrounding villages.

A total of 5 soldiers and a senior officer were also killed while repelling the attack. A Cordon and search of the locality is ongoing, while the bodies of the fallen soldiers have been recovered and deposited in the military morgue. The wounded are also receiving treatment in the military medical facility.

In another development, Soldiers on patrol in Baga have arrested 4 suspects caught carrying a truck loaded with fish, explosives and rifles.

At Konduga also in Borno State, a suicide bomber in a Golf car yesterday crashed into a checkpoint killing himself, a policeman and 3 Vigilante Youth members.