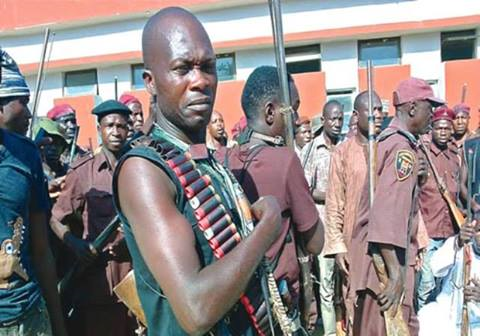 May 22, 2014 – 500 Nigerian Hunters Begin Spiritual Hunting For Chibok Girls In Sambisa Forest; “We Are Not Afraid Of Boko Haram”

A carefully selected group of hunters armed with magic charms are running out of patience on the way the Nigerian government is handling the issue of Boko Haram and the kidnapped secondary school girls.

The seasoned hunters armed with homemade guns, amulets, poisoned spears have gathered together in preparation for a spiritual search for the innocent girls kidnapped by the bloody terrorists.

According to the Associated Press, 500 hunters, some as young as 18 and some in their 80s, said they had been selected by their peers for their spiritual hunting skills and had been waiting for two weeks in Maiduguri, the Borno State capital, to get backing from the military and get moving. 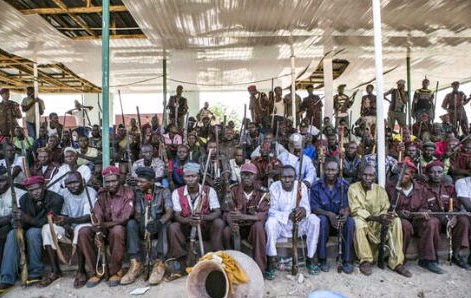 With cow horn trumpets echoing eerie war cries from the screaming and chanting men who twirled knives and swords with dexterity, occasionally stabbing and cutting themselves with no apparent harm, the hunters claimed their magic charms prevented any blood being drawn.

They also trust amulets of herbs and other substances wrapped in leather pouches as well as cowrie shells, animal teeth and leather bracelets to protect them from bullets.

A spokesman for the hunters, Sarkin Baka, stopped short of actually criticising the military, adding that “we’re not saying we are better than the soldiers, but we know the bush better than them.”

Military spokesman did not immediately respond to an emailed question from AP on whether it would take advantage of the hunters’ local knowledge.

The hunters said they were reaching the end of their patience, adding that “we are seasoned hunters, the bush is our culture and we have the powers that defy guns and knives; we are real men of courage, we trust in Allah for protection, but we are not afraid of Boko Haram.”

One of them, Baban Kano, said “if government is ready to support us, then we can bring back the girls. But if they are not, they should tell us, so that we can disband and return to our homes and family.”