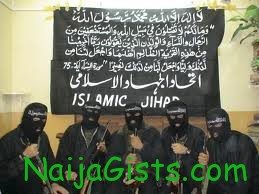 Feb 3, 2012 – 6 Boko Haramists Killed During A Battle For Supremacy

Remember a popular saying which states, a sinner will never go unpurnished, the time has come for Boko Haram to receive their own reward in full for their merciless killing in Nigeria.

According to a report from Channels TV, 6 members of Boko Haram sect has been killed during a fight that broke out between two factions in Maiduguri, Borno State. naijagists.com

According to an insider, a faction that broke out from the sect( Ansaru) is battling for supremacy, and wrestling power from the de-facto leader, Abubakar Shekau, in a bloody manner and many of their followers are considering dumping the sect, and relocate back to Chad Republic.

Their judgment is just beginning, these idiots called Boko Haram will fight themselves to extinction.

Continue Reading
You may also like...
Related Topics:battle for supremacy, boko haram, fighting each other