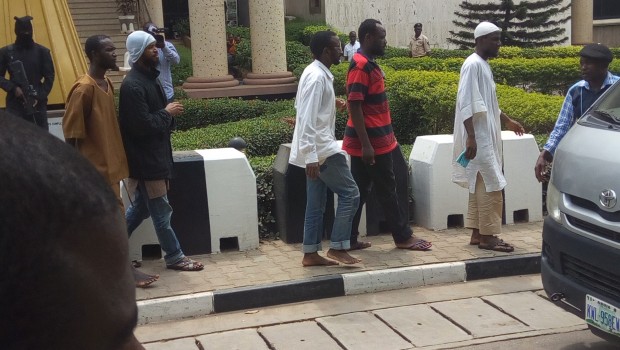 A Federal High Court sitting in Abuja yesterday remanded in Kuje Prison seven suspected Boko Haram leaders for the kidnap and murder of 11 foreign nationals between 2011 and 2013 in the North. Justice John Tsoho remanded them pending their trial in the criminal charges brought against them by the Federal Government.

The Federal Government had slammed an 11-count charge against the seven suspected leaders of the dreaded Boko Haram sect. However, the accused pleaded not guilty when the charges were read to them.

The defendants, said to be leaders of Boko Haram before establishing their own faction, are charged with conspiracy, hostage taking, supporting a terrorist group, membership of a terrorist group, illegal possession of firearms and concealing information on terrorism.

According to the charge filed by the office of the Attorney General of the Federation (AGF), the defendants, in February 2013 at Ikirima Boko Haram Camp in Sambisa Forest, allegedly “murdered seven internationally protected persons – Carlos Bou Azziz, Brendan Vaughan, Silvano Trevisan, Konstantinos Karras, Ghaida Yaser Sa’ad (F), Julio Ibrahim El-Khouli and Imad El-Andari – and buried the bodies in a shallow grave. They were charged, in count-four, with hostage-taking, contrary to Section 15(c) of the Terrorism (Prevention) Act 2011, as amended in 2013, and punishable under same.

The defendants were alleged to have, on February 18, 2013, at Life Camp Yard of SETRACO Construction Company in Jama’are, Bauchi State, “did knowingly seize and continue to detain” the seven expatriates, “at Ikirima Boko Haram camp in Sambisa Forest for about 10 days before their eventual murder”.

They were, in count five, accused of knowingly giving “an explicit condition for the release of the seven expatriates” and they were also accused of being members of a “Boko Haram splinter group known as Jama’atu Ansarul Muslimina Fi Biladis Sudan aka ANSARU being a proscribed terrorist group in Nigeria, contrary to Section 16 (1) of Terrorism (Prevention) Act 2011 as amended in 2013 and punishable under the same section of the Act.”

The seven defendants were equally accused of being in possession of firearms without licence, punishable under Section 27 (1) (a) (1) of the firearms Act Cap F28 LFN 2004. The prosecution said firearms were recovered from Usman’s house at Rafin Guza, NDC Layout, Kaduna State, sometime last year.

The trial judge, in a short ruling, said the Federal Government had all the machinery to ensure the security of the citizens, adding that the court would not compromise the personal liberty of the defendants.