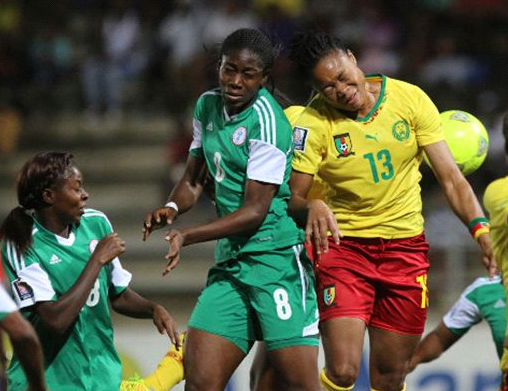 The Nigeria’s Super Falcons have once again clinched the African Women Cup of Nations for a record 8- times after defeating host Cameroon in the final before an intimidating crowd at the Stade Ahmadou Ahidjo in Yaounde, Cameroon.

Desire Oparanozie’s late strike was enough for the Falcons to retain the title they won in Namibia in 2014.
The Cameroonian Lionesses though dominated play from the beginning but were very profligate in front of goal wasting chances upon chances.

As early as the 4th minute, Gabrielle Onguene went past the Nigerian defense like a ghost, only to shoot wide with just Goalkeeper Alaba Jonathan to beat.

Okobi however stood out in the midfield despite the Falcons poor start to the game, she found space in the middle, and then turned brilliantly only for her shot to go so high and completely off target.

Cameroon’s Enganamouit was as expected a threat to the Nigerian defense and danger man of the Lionesses and she made frantic efforts to ensure her team take the lead, but for Goal keeper Alaba Jonathan’s brilliance, the Cameroonian would have matched her pre-final hype.

Chance after chance fell on to the hosts, Ngono Mani, Ngock Yango, Gabrielle Oungene and Gaelle Enganamouit all had four clear shots on target as against none for the Super Falcons in the entire first half, a clear opposite that they were a shadow of what they’ve been, dominant in the whole tournament.

In the second half, the Falcons faced a more serious charge from their host, but a super defensive display from the duo of Onome Ebi and Oshinachi Ohale ensured the game stayed at goalless.
Again, in the 57th minute, a rather poor Asisat Oshoala not playing at her best, lose the ball in the midfield allowing Onguene begin another onslaught on the Nigerian defense, only goal keeper Alaba Jonathan could save the Falcons’ blushes, and she did.

Chioma Wogu was thrown into the fray to replace Washington Spirits’ Francisca Ordega in the 65th minute, the change however brought pep into the attack line of the Falcons, of course Oparanozie got the needed support she craved for to be more potent upfront.

The Falcons finally got the game’s only goal, and the match winning goal in the 85th minute when Desire Oparanozie met up with a lob from impressive Ngozi Okobi, and she coolly slots home. The goal was greeted with total silence inside the Ahmadou Ahidjo stadium a 40,000 seater which was filled up to capacity. 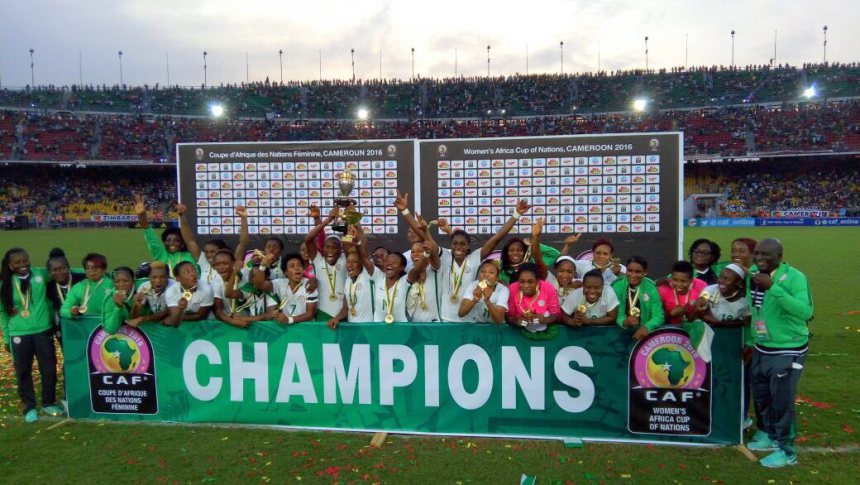 The Super Falcons held on for the win, to claim the trophy and rule Africa again.