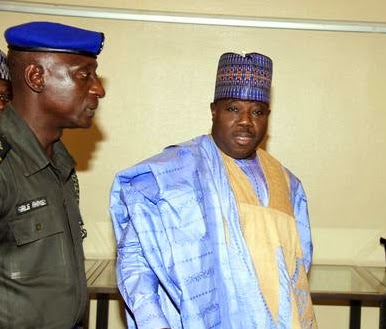 A former governor of Borno State, Ali Modu Sheriff, widely accused of sponsoring Boko Haram insurgents in Nigeria, may be lobbying for the release of the Chad-bound cargo aircraft confiscated in Kano for transporting large consignment of military hardware, PREMIUM TIMES can report today.

Sources at the Aminu Kano International Airport, where the plane is currently detained, said Mr. Sheriff visited the Kano airport at about 10 p.m. on Saturday and held discussions with some officials on the possibility of releasing the aircraft.

Our sources said on arriving the airport, officials allowed the former governor a secret tour of the aircraft, during which he inspected its consignments.

“I was there and I saw him and two airport security officials accompanying him to inspect the plane. I saw the black helicopters and two bullet proof SUVs,” one of our sources said. “I also heard him (Mr. Sheriff) say verbal directive had been given from Abuja for the release of the plane but that authorities of the airport were insisting on written directive.”

Mr. Sheriff could not be reached to comment for this story. His known mobile telephone number was switched off for several hours that PREMIUM TIMES called Saturday. He is also yet to reply a text message sent to him.

The Manager of the Kano Airport, a Mr. Adamu, told PREMIUM TIMES he is in Abuja and was therefore unaware of Mr. Sheriff’s tour of the detained aircraft.

The former Borno governor is a close ally of both the Nigerian president, and the government of Chad – the plane’s final destination.

A 2010 Intelligence report by a Nigerian security agency suggested that Mr. Sheriff was personally involved in the recruitment, training and dispatch of Boko Haram fighters, under the full cover of Idris Deby, the Chadian president.

Chad is Nigeria’s neighbour. Laying on Nigeria’s northeast shoulder, and sharing long distances of unregulated borders, it is considered a window to safety for Boko Haram fighters.

An Australian negotiator engaged by the Nigerian government to bring Boko Haram insurgents to the negotiation table, Stephen Davies, also spoke of how the insurgents named Mr. Sheriff as one of their sponsors during his conversations with the terrorists.

Airport officials told PREMIUM TIMES Mr. Sheriff’s verbal pressures to let the plane go was turned down. He was asked to get written permission from “ogas at the top” – authority high up in Abuja – our sources said.

After inspecting the plane and holding discussions with local officials, Mr. Sheriff reportedly left for Abuja, Nigeria’s capital city, in a private jet at about 11:30 p.m. Saturday.

Security operatives at the Kano Airport had seized the plane when it landed at the facility at about 2a.m. Saturday as a result of technical problems. Crew members of the airplane were immediately detained while investigations continued, officials said.