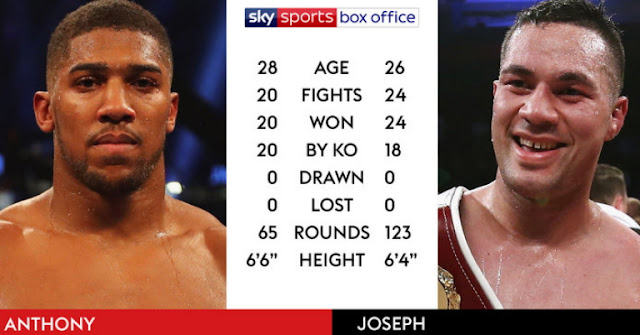 British Nigerian boxer Anthony Joshua has warned his next opponent Joseph Parker that no man will stop him from fulfilling his dream of becoming the undisputed heavyweight champion of the world.

The two fighters came face-to-face for the first time on Tuesday as they kicked off the promotional tour for the March 31 showdown. 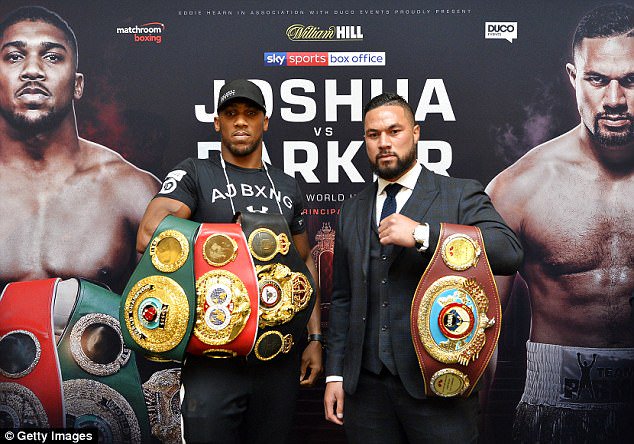 Before the fight was announced Parker’s team sought to highlight perceived weaknesses in AJ’s armour by pointing out that he has been dropped during both his amateur and professional career.

During his unpaid days, Joshua was floored by compatriot David Price in training. AJ revealed on Tuesday that he headed to that session having ‘come out of a police cell’. Last April, too, Joshua had to climb off the canvas on the way to beating Wladimir Klitschko.

‘All those times taught me it will take more than a human to stop me going where I’m destined to be,’ he told Team Parker.

‘What I have learned from those times of adversity and going through storms is that it will take more than any human to stop me on this journey.’

He added: ‘It’s about making history now, we have always been moving in that direction so it’s an honour to be up here with another world champion. But in terms of Parker, I don’t really know how to take his camp. In terms of what’s been said but I take everything with a pinch of salt and roll with the punches.

The two unbeaten heavyweights will collide for the WBO, IBF and WBA titles at Cardiff’s Principality Stadium.sa

Joshua has promised ‘fireworks’ and reminded the WBO champion: ‘This isn’t a three round fight based on skills, it’s a 12 round dog-fight and you have to have heart.’

Parker responded by claiming it was his ‘destiny’ to be in big fights such as these.

‘I have a big challenge in front of me in Joshua’ he said. ‘I know his strengths, he knows mine, I know his weaknesses, he thinks he knows my weaknesses, I can’t wait for this fight to happen on March 31, I can’t wait to train hard, to be back to put on a great performance, hopefully catch him on the chin and knock him out.’

Parker’s trainer Kevin Barry did admit, however, that his fighter would need to produce the ‘greatest performance’ of his career to emerge victorious.

‘This is a really exciting fight and the heavyweight boxing division needs a fight like this. In fact boxing in general needs champions fighting each other,’ he said.

‘Anthony Joshua is a big, strong, powerful guy. It’s fair to say he’s probably a little stronger than Joe. He’s won all of his fights by knockout; he has a considerable height and reache advantage over Joseph Parker.’

‘So my challenge to my fighter Joseph Parker is I need this to be his greatest performance. If he can show the public and Anthony Joshua what I see in the gym when he’s at his best, he’s a very hard guy to fight… (but) if Joseph Parker doesn’t bring his A-game it’s going to be a very difficult night.”

Continue Reading
You may also like...
Related Topics:anthony joshua, fight, joseph, next, parker