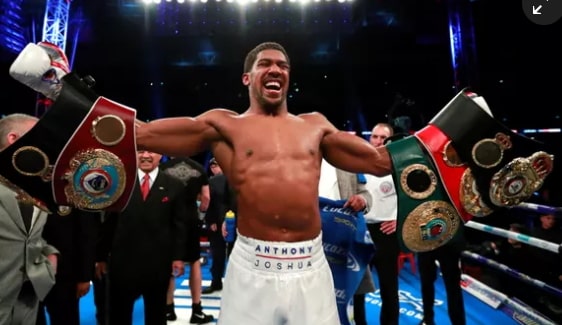 After two slower opening rounds, Joshua found his range in that fight.

And it was a series of accurate combinations which did it in the seventh round, first with an overhand right and then some big lefts.

Live Match Updates Below
Anthony Joshua wins in round seven by knockout
AJ does it again!

A fierce right hander has Povetkin stunned. And then Joshua goes in for the kill, unleashing a volley of shots.

Povetkin goes down on the canvas, tries to get back up but Joshua lands a killer blow.

Round six
Many pre-fight predictions were that Povetkin would be very dangerous in the first four to five rounds before perhaps fading. We’re into round six.

The crowd roars as Joshua lands a couple of quick combinations. But another upper cut from Povetkin makes it

Round five
Both fighters appear to have recovered from those early blows to the face. That’s a hard-fought round.

When Povetkin gets in close, he looks threatening. Joshua needs to keep an eye on that.

Round four
Better from Joshua.

Joshua lands one on Povetkin’s face early in the fourth round as his right hander makes it through and cuts the Russian’s left eye. More blood in this fight.

Povetkin’s tactics are about the power shots. But AJ seems to be finding his range and is moving well around the ring.

Round three
Joshua is struggling to settle here against his 39-year-old opponent. Another left from the Russian creeps through.

But the Brit finishes the round in better fashion with some clever counter work. Probably about even that round.

Round Two
Drama already as that late round one attack from Povetkin, wearing black shorts, looks to have landed a blow on Joshua’s nose and there is blood. Could that impact upon the Briton’s breathing later on?

Joshua aims to consolidate in round two but Povetkin lands a right hander. Povetkin already trying to bring his dangerous left hook into play too. Joshua ends with a couple of jabs.

Round One
End of the first round. Joshua, wearing white shorts, looked to control the middle of the ring.

But Povetkin, dangerous when he gets up close, looked to close gap to his opponent. The Russian finished strongly with a clever combination as Joshua stumbled slightly.

Steve Gray the third man in the ring
For those interested, Fleetwood’s Steve Gray is the referee. The fifth time he has taken control of a Joshua fight.

Continue Reading
You may also like...
Related Topics:Alexander Povetkin, anthony joshua, knocks out