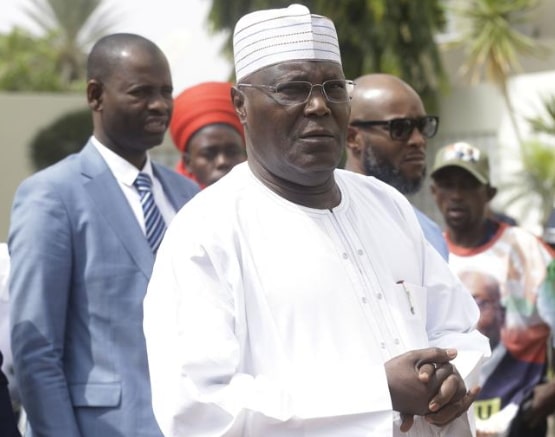 The PDP Presidential candidate Atiku Abubakar who is yet to concede defeat has asked his legal team to call for sack of his opponent, President Buhari .

It was also being considered, as of the time of going to press on Saturday night, that the team was debating to either ask the tribunal to declare the former Vice President as the winner of the election or order a rerun.

The Independent National Electoral Commission had, on Wednesday, declared Buhari of the All Progressives Congress, as the winner of the election.

However, Atiku, on Thursday, rejected the result, citing several malpractices including the use of the military to allegedly perfect voter intimidation and suppression of votes in the PDP strongholds; connivance by the INEC officials and security agents and the ruling party to manufacture bogus figures and outright falsification of the results from the polling units.

Atiku said on Saturday that he was encouraged to go ahead with the court case because of the presence of fearless men and women of the Bench.

“I have just inaugurated my legal team and charged them with the responsibility of ensuring that our stolen mandate is retrieved.

“I am encouraged by the presence of fearless men and women of the Bench. The judiciary, which had, in the past, discharged itself ably is once again being called upon to deliver judgement on this matter that will be untainted by lucre and ‘uncowed’ by the threat of immoral power.”

He also assured Nigerians, according to a statement by his Media Adviser, Paul Ibe, that “sooner than later, these noble dispensers of justice will give a judgement that will represent a historic denunciation of electoral fraud and mandate banditry.”

The PDP National Chairman, Uche Secondus, said the legal team would consist of more than 18 lawyers.

Investigations by one of our correspondents showed on Saturday that the former vice president had given out a mandate to the legal team to argue that the tribunal should declare him the winner of the election based on the results available to the party’s agents.

Analysis done by election experts and academics close to the former ruling party and its presidential candidate was said to have given impetus to the alleged rigging of the election by the ruling party.

One of the sources said;

“Whosoever cares to analyse the announced results would see a clear pattern of systematic vote allocations based on a careful study of previous national election results.

“But this time round, what the riggers did was to suppress the result figures in the PDP strongholds of the South-East and South-South, but went ahead to maintain the usual wide margins between the PDP and President Buhari. They equally did the same in the Christian North (areas), but allowed a slide margin.

“Seemingly skillfully, they still maintained the high figures in Buhari’s strongholds, and at the same time, retaining the usual wide margins against the PDP.

“All these are done so as to guarantee more votes for Buhari against Atiku. Anyone can see through this clumsy scheme and the solution to it is simple.”

It was also gathered that the PDP and Atiku would also ask the tribunal to order a forensic analysis of the ballot papers used for the election.

The APC National Publicity Secretary, Mallam Lanre Issa-Onilu, on the other hand said the party was prepared to meet Atiku at the tribunal.

“It is within his right to go to the court to ventilate his grievances. We are prepared to meet him in court and not shaken by that.

“We have evidence of electoral fraud perpetrated by the PDP, we will be willing to confront them (members) in court.”