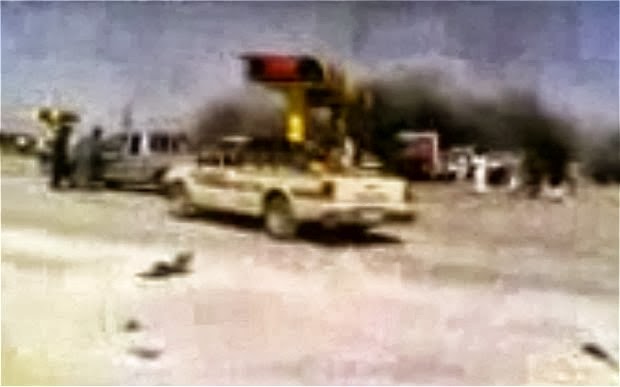 There was confusion on Tuesday on whether or not the outlawed Boko Haram sect had overrun Bama, a town 70 kilometres from Maiduguri, the Borno State capital.

While Rueters news agency quoted security sources as saying that the members of the sect had overrun much of the town after hours of fighting on Monday night and early hours of Tuesday, the Deputy Governor of the state, Zannah Mustapha, and the Civilian Joint Task Force dismissed the report as false.

But what was clear to our correspondents as of press time on Tuesday was that the casualty figure had risen from 59 to 180.

The militants had launched an attack on Bama on Monday but were initially repelled. They however came back in greater numbers overnight, the security sources and witnesses said.

The sources said there were heavy casualties on both sides. One said at least 5,000 people fled the town.

Reuters quoted a soldier involved in the Bama battle as having said that several of his colleagues were killed close to the Bama armoury in a bungled strike by a fighter jet targeting the insurgents.

He said the troops called in air reinforcements as they took on the insurgents but by the time a fighter jet arrived, they had mostly lost the battle in the area .

“The jet then bombed the area but accidentally killed everyone there, both Nigerian troops and insurgents,” it quoted the soldier as saying.

“The situation is bad. We lost so many of our men,” he said.

But the Borno State Deputy Governor told journalists at a news conference in Maiduguri that the military was in full control of the security situation in the town.

Although Mustapha was silent on the casualty figure, he revealed that over 2,000 people who fled Bama had been resettled in the National Youths Service Corps orientation camp and the Government Girls Secondary School in Maiduguri.

He added, “The attack on Bama yesterday (Monday) was very unfortunate; but I want to reassure our people that government is on top of the situation. Already, those in the camps are being taken care of and our security forces are engaging the insurgents in a fierce battle which is worthy of commendation.”

Appealing to the people to desist from creating unnecessary tension in the state, he said he was “particularly happy for the cooperation we have so far received from Gombe and Adamawa state governments.”

At an earlier press conference in Maiduguri on Tuesday, the Chairman of the Civilian JTF, Jubrin Gunda, had said that 35 insurgents were arrested in Bama.

Gunda said the report by some international media that quoted Senator Ahmed Zannah as saying that the town had been overrun by the insurgents should be discountenanced.

Admitting that the insurgents attempted to overrun Bama, he said they were subdued by the military at the periphery of the town.

Gunda, who added that the death toll had risen to 180, said, “We categorically deny and disassociate ourselves from an interview granted to some foreign media by one Senator Ahmed Zannah as what he stated is not true facts on the ground.

“More so, the interview he granted has contributed in instilling fears in the minds of citizens of Borno State, especially the residents of Maiduguri.”

“However, we want to reassure the citizens of Borno State that, nobody should panic and no one should leave Maiduguri because all that have been said are mere rumours.

“All citizens should desist from making unguided and false information which will further frighten the citizens unnecessarily.”

Zannah had also told one of our correspondents over the telephone that the insurgents were in control of Bama.

He said, “Like I said yesterday(Monday), Bama is in the hands of Boko Haram, nothing has changed today(Tuesday). The Borno State Government is trying to play politics with the issue. I don’t know if they are trying to appease the military or the Federal Government.

“Even this(Tuesday) morning, my brother’s two children were killed. Anybody telling you that Boko Haram is not in control of Bama is telling a lie. Many people were killed in the fighting.I don’t know the number because there is no access to the place. Some of those who died have not even been buried yet.”

Investigations revealed that the military authorities had sent fighter jets during hours of fierce fighting between troops and the insurgents early on Tuesday.

A security source said that the military leadership in the North-East had made preparation for the strafing of the town by telling all the civilians and even military personnel to relocate from the vicinity of areas under the control of the insurgents.

It was learnt that some security personnel and civilians who obeyed the advice were being quartered at Sectors 8 and 9 in Maiduguri.

It was further gathered that the intensity of air attacks on the insurgents aided the soldiers in pushing them out of Bama.

As of the time of filing this report, the insurgents were said to be massing on the outskirts of Bama apparently to carry out another assault on the town.

The security source said that soldiers and the insurgents were still engaged in a gun duel over the control of the town even though the troops had been able to push them out of the town.

However, there were fears in Maiduguri as some residents said it was time for them to start planning relocating from the town.

One of them , Sunday Emmanuel, said his apprehension was based on the news filtering through Bama and the influx of people from the town into Maiduguri.

He said, ‘‘There is everything to believe that the insurgents are closing in on Maiduguri with the capture of Damboa, Gwoza and now the attack on Bama.”