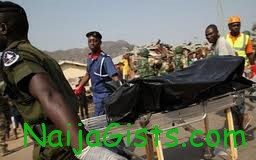 Some men suspected to be members of the Islamic fundamentalist sect, Boko Haram struck early this morning in Ajaokuta, Kogi State, North Central Nigeria, killing four persons. A police station and a first generation bank were burnt by the group.

Though a source claimed that it was a robbery attack, the incident had the trade mark of Boko Haram terrorist organisation. naijagists.com

According to an eyewitness, a pastor who heard the booming of guns at about 6.45 a.m. ran out of his house through the back door.

He successfully escaped with his wife and members of his family thinking it was an armed robbery attack.

However, a few minutes later, residents of Abuja Estate and those around Church Layout where most of the churches in Ajaokuta are located, realised it was a Boko Haram attack.

Victims of the attack have been identified as Dr. Ahmed, a medical personnel at Ajaokuta Steel Company Medical Centre and Mr. Balogun, a driver of the truck conveying fire service men to the scene of the attack.

The fire fighters approached the razed police station to put out the fire, their driver, Balogun, was shot dead by the attackers.

Two other fire fighters were reportedly killed and their efforts to put out the fire frustrated.

Some other persons were said to have also been attacked.

The attack has paralysed economic activities in Ajaokuta.

Offices, banks and shops were not opened this morning while school children who reported in their various schools were turned back.

A resident of Ajaokuta who attempted to report the attack to the Police Area Commander in the town told P.M.NEWS on phone this morning that the police boss’ phone could not be reached just as the lines of other police officers went dead.

As at press time, there was no official response from the police or government officials on the attack.

The Boko Haram sect has not spoken officially or claimed responsibility.

In another incident, at least six persons were killed by Islamic fundamentalist sect, Boko Haram in Maiduguri, the Borno State capital, Northeast Nigeria.

A statement issued by the Joint Military Task Force, JTF, spokesman, Lt. Col. Hassan Mohammed, indicates that there were several bomb explosions in the early hours of Thursday in Maiduguri, while some unexploded bombs were defused by the JTF with no casualty recorded.

The release stated: “In Kabar Maila in Shehuri North, six persons were killed. Preliminary investigations reveal that the six deceased persons were suspected to have been slaughtered by persons suspected to be their fellow sect members.”

The release further states: “the incident occurred in the area where 11 sect members had an encounter with the JTF troops last weekend. The killing may have been as a result of division among sect members.”

It states that JTF will continue to be proactive in dealing with Boko Haram and advised the people to be security conscious.

The group has claimed responsibility for strings of deadly attacks across northern Nigerian cities such as Bauchi, Maiduguri, Kano, Suleja, Abuja, etc.

Reports say the group has killed over 900 people since it began its attacks, with the deadliest being that of 20 January 2012 in Kano, Northwest Nigeria during which over 185 people died.

The group again struck on Christmas Day in Madalla on the outskirts Abuja, killing over 40 worshippers at St. Theresa’s Catholic Church.

Meanwhile, controversy is still raging over the arrest of its spokesman, Abul Qaqa.

The group says the man arrested is not their spokesman but a member identified as Abu Dardaa who went to negotiate with government following government’s request for dialogue with the group.