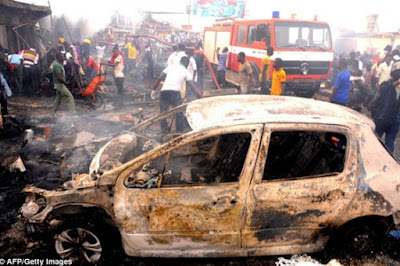 Another suicide bomber struck in Maiduguri, the Borno State capital, on Wednesday, killing four persons at a mechanic workshop along Baga Road.

Residents were already fancying the thought that the day was going to end without any tragic incident when the explosion occurred, leaving people running helter-skelter in a downpour that lasted several minutes.

It was gathered that several persons were injured in the latest attack.

The Borno State Commissioner of Police, Mr. Aderemi Opadokun, who confirmed the bomb attack, said four persons lost their lives in the incident.

The commissioner, in a test message to the enquiry of our correspondent said, “Yes, there was a bomb attack in Maiduguri around 5pm on Wednesday.

“There was an Improvised Explosive Device attack at a mechanic workshop by the NNPC Mega Filing Station along Baga Road, Maiduguri, as a suicide bomber detonated the IED strapped to his body.

“Four persons including one Dan Bulama, the owner of the workshop, died in the explosion while eight others sustained injuries.”

The text added, “The CP and a team of investigators visited the scene, corpses and the injured victims were evacuated to the hospital.