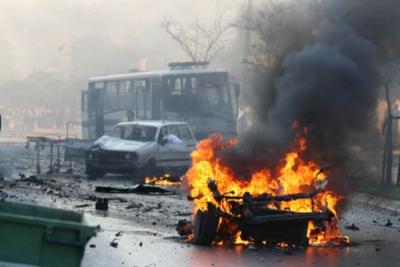 After several bombs which were detonated in Damaturu, the capital city of Yobe State last weekend, thousands of residents of the town have started fleeing their homes, a clergyman said on Tuesday.

The clergy, Reverend Idi Garba, said many of the fleeing residents are Christians and non-natives, adding that the city remained without police protection.

About 153 people allegedly died during last Friday’s attack, responsibility for which had since been claimed by members of the Boko Haram Sect.

The Islamist sect which has, in recent times, claimed responsibility for several bombings and gun attacks in Nigeria, says they are fighting for the Islamisation of Nigeria, and to avenge the killing of their members.

Despite the assurance of the Police Commissioner of Yobe State, Suleiman Lawal, that the force has the matter under control, residents are fleeing the area out of fear of more attacks.

It will be recalled that after last Friday’s attacks in Damaturu and Maiduguri, Borno State, the United States embassy said it had received information that certain hotels in Abuja might be the next targets of the sect.

However, the National Security Adviser, Owoeye Azazi, dismissed the information as creating unnecessary public anxiety, saying the government will continue to ensure the lives and security of people living in Nigeria.

There are mounting fears that the Boko Haram sect is growing even more powerful and brazen, as evidenced by the recent spate of its attacks.