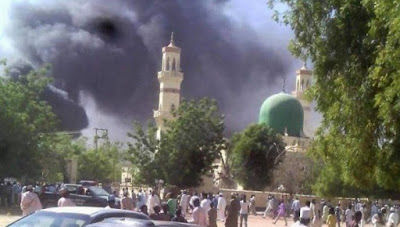 A female suicide bomber today walked into a mosque in Cameroon and blew herself up.

According Reuters, the girl of 12 or 13 years old arrived at the Sanda-Wadjiri mosque in remote Kolofata at the first call to prayer at between five and six a.m., the governor of Cameroon’s Far North region Midjiyawa Bakary told Reuters by telephone.

“The men were bowed in prayer when she came. Five of the worshippers were killed and the bomber also.” – Bakary said.

He did not name any suspects, but Boko Haram has repeatedly used suicide bombers as well as strapping children with explosives to strike at civilian and military targets.

Continue Reading
You may also like...
Related Topics:bomber, cameroon, suicide