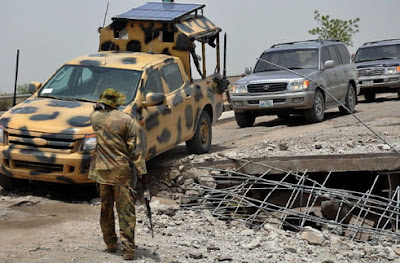 The Army noted that the incident led to the death of six persons, even as three soldiers sustained varying degrees of injuries. The disclosure was made in a statement by the Acting Director, Army Public Relations (DAPR), Col. Sani Usman.

“Today (yesterday) afternoon, suspected elements of the remnants of Boko Haram terrorists who were foraging for food, ambushed troops of Operation Lafiya Dole, escorting commercial vehicles from Damboa to Maiduguri, at Sanda general area, Borno State. “Unfortunately, five civilians lost their lives at the incident and another died on the way to the hospital. Three soldiers also sustained injuries.

The wounded have been evacuated to Maiduguri.