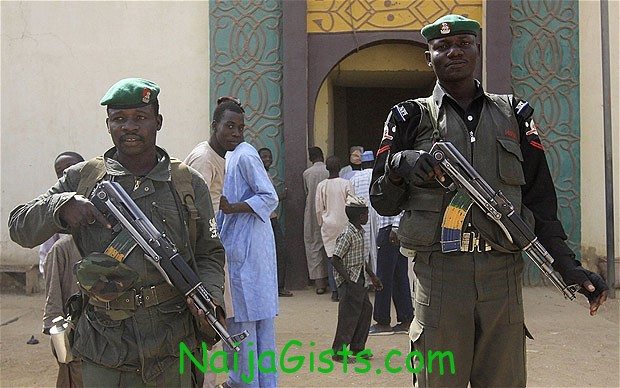 Over 4 Boko Haram members were killed yesterday during a raid carried out by Nigerian soldiers in Kano City on Sunday May 6th, 2012. naijagists.com

“We carried out an operation today on a terrorists hideout…where we killed four of them and arrested many after a prolonged shootout,” Lieutenant Iweha Ikedichi told AFP. Troops from military special Joint Task Force (JTF) had stormed the hideout in the Hotoro Kwari suburb of the city notorious for Boko Haram attacks.

About a dozen of the suspected Islamists were arrested in the raid, according to a military source, who spoke on condition of anonymity. A resident also said troops demolished the building which served as the Islamists’ hideout.

The raid came a day after gunmen shot dead a resident in the area.Residents said gunfire broke out in the neighbourhood as attackers suspected to be Boko Haram members engaged soldiers who had surrounded the area.The duel lasted for more than an hour, reported an AFP correspondent who heard the gun shots from three kilometres away.

“Gunmen ran around the neighbourhood shooting indiscriminately and engaged soldiers in a gun fight,” a resident said.

“Five of them scurried past my house holding AK-47 rifles and shot dead a dog that kept barking at them as they hurried along the alley,” he said.

Nigerian troops killed one suspected member of the sect and arrested 13 others in dawn raids last month on two hideouts in Maiduguri city, capital of Borno state, and the the sect’s base.

Boko Haram’s increasingly bloody insurgency has claimed more than 1,000 lives since mid-2009. In the city of Kano, close to 200 people were killed in multiple bombings 20 January this year.

Posted by pmnews 13 hours, 37 minutes ago on May 6, 2012, 11:06 pm. Filed under Metro, National, News. You can follow any responses to this entry through the RSS 2.0. You can skip to the end and leave a response. Pinging is currently not allowed.