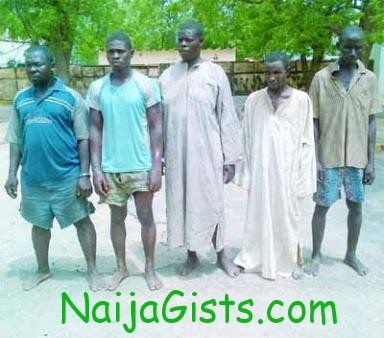 An indication that jobless Boko Haramists are symbols of poverty has surfaced as the above pictured suspects who attacked a Church in Biu, Borno state claimed they were paid N7000 ONLY to carry out the attack.

Ibrahim Mohammed Babangida, one of the suspected who spoke with journalists from his custody said one Magaji Bala, a butcher paid N7,500 to him as his engagement fee to carry out the attack.

Confession Of A Boko Haram Members

“I was sleeping in my house when Magaji called me and handed over N7,000 to me for the operation,” he said, even as one of the suspects also corroborated the claim.

The arrested suspects are

The above suspects told newsmen at the 21 Armoured Brigade in Maiduguri, the Borno State capital, yesterday that they were butchers by profession in Biu Market and were picked up in their different houses in Biu by the JTF operatives.

They also claimed to hail from Jigawa and Katsina states, adding that they came to Biu, about 187 kilometres to Maiduguri and South of Borno, to eke a living. Some gunmen suspected to be members of the Boko Haram sect had stormed a local branch of the Ekklizivar Yan’uwa A Nigeria (EYN) in Borno on June 10 in a bloody shoot out, leading to the death of three worshipers.

Many others were also wounded. Sources said the gunmen,numbering about three had invaded the EYN Church (Church of the Brethren in Nigeria) while the Sunday service was going on, killing three, including a woman while many of the members sustained various degrees of injuries from gunshot. Meanwhile, Spokesman of the Joint Task Force (JTF), Lt Col Sagir Musa, who paraded the suspects said the task force believed the seven men were involved in the Biu Church attacks.

He, however, said the security agencies in the state needed the cooperation and partnership of the people to succeed. “Handling of the security situation in the country is a collective effort and as such, security agencies should not be left with the responsibility alone. There is need for partnership because it is everybody’s problem. It is time we saw it as our problem especially in making information avalaible,” Lt Col Musa said.

Also reacting to allegation of harassment of civilians by the JTF troops, the spokesman assured that the leadership of the task force would continue to preach, sensitize and educate the personnel on the need to maintain discipline even in the face of frustration. He noted that maintaining maximum discipline among troops was one of the major challenges of any internal operation by security agents but appealed to the people for understanding.

Boko Haram Plans To Use Stolen Vehicles For Suicide Bombing

He also urged the residents to report cases of stolen vehicles to the police or JTF, adding that the task force had uncovered plan by the Boko Haram sect to use stolen vehicles to launch attacks on some public buildings. “Information recently available to the JTF in Maiduguri indicated that there had been desperate moves by Boko Haram to steal/snatch vehicles to be used for terrorists’ activities by implanting Improvised Explosive Devices in vehicles and or through suicide bombing,” he said.

He warned that owners of such stolen vehicles, “if used for terrorism acts would be treated as collaborators and accomplices.”

Boko Haram is already in hot soup now that the international community is involved.

God will fish you out one by one and you’ll be brought to justice.