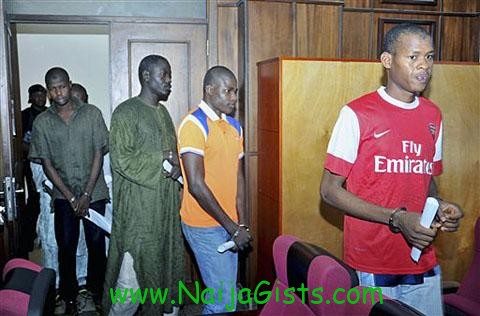 Nov 18, 2011 –Boko Haram: Release Our Members For Peace To Reign in Nigeria

Radical Islamist sect, Boko Haram, has said that they will not dialogue with the Federal Government (FG) until all their members who have been arrested are released.

Spokesperson of the group, Abul Qaqa, who disclosed the groups demands on Thursday called on President Goodluck Jonathan; Senate President, David Mark; Speaker of the House of Representatives, Aminu Tambuwal; and the Attorney General  and Minister of Justice, Mohammed Bello Adoke, to respond to their request or they would not relent in their attacks.

According to Qaqa: “The recipe for peace is the unconditional release of our members“.

He, also revealed the identities of two suicide bombers who attacked the Joint Task Force headquarters (JTF) in Maiduguri and the Anti Terrorism two- storey building in Damaturu, as Usman alias Baana and Abi Yusuf, 26.

The group’s spokesperson said that Baana, a successful businessman who left behind a wife and a son, was seen as a martyr because he was barely four days in the group before he pleaded to be allowed to carry out the act on the anti terrorism building.

He also revealed that Yusuf was responsible for the bombing of the JTF headquarters in Maiduguri.

“He was also a martyr whom we are going to miss a lot because of his outstanding mastery of how to improvise explosives,” Qaqa said.

Other demands of the group include, “Islam reigns supreme, and Sharia replaces the Constitution; all women are degraded; all ties with the Western World are severed”.