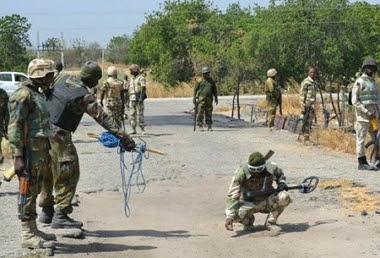 At least 3 soldiers have died and 5 others critically injured in a deadly ambush attack by Boko Haram terrorists on a military convoy in Borno state.

According to a top security source, the terrorists ambushed an operational convoy of the 81 Battalion of Nigeria’s army at Bulabulin Ngaura town in Maiduguri where 3 soldiers were killed.

The reliable security source said the insurgents carted away 2 gun trucks belonging to the Nigerian army.

The suspected Boko Haram militants were also reported to have set ablaze a military operational camouflage colored hilux vehicle after futile attempt to steal it.