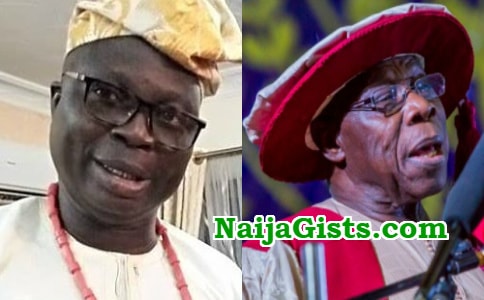 Veteran Nollywood actor Bolaji Amusan Mr Latin in this recent chat with Tofarati Ige talks about his marriage, acting career of 30 years and other issues.

This is your 30th year in the movie industry. What are the major lessons you have learnt?

I have learnt a lot of lessons in the past 30 years. When I started my career 30 years ago, the industry wasn’t like this. In those days, we used to struggle to be known and our parents were not in support of what we were doing. People wanted their children to be doctors, lawyers and other professionals. But things improved gradually and we thank God that we now have modern cameras with which we shoot movies. The industry is more exposed and there have been a lot of improvements.

What are some of the major challenges that you faced over the years?

The first challenge was the issue of acceptability; getting people to accept me as an actor. Then, I had to determine the kind of roles I wanted to play. I had tried several roles before I finally found fulfillment as a comedian. It was quite challenging during the period I was trying to find the perfect role for me.

You broke away from the norm of comedians wearing costumes. Weren’t you discouraged when you started your style of comedy?

I have to specially thank God and actor, Nkem Owoh, aka Osuofia, as well as my late boss, Segun Adeniji-Samuel. They inspired me. A child can inspire an adult and vice versa. Those two people made me understand that you can change the face of comedy. Osuofia made people laugh without wearing costumes and those were some of the things I imbibed. As a clown, you can wear costumes but my aim was to change the face of comedy. Stand-up comedians don’t wear costumes and they make people laugh. I stopped using costumes in 2000. I wear whatever matches the role I am to play and other comedians followed suit.

What are the activities of the Mr. Latin Foundation?

We have been able to empower so many people such as widows and indigent people. Unfortunately, we don’t have the right financial backing. I fund the activities of the foundation from what I make as an actor. I see it as a way of giving back to the society.

The Theatre Arts and Movie Practitioners Association of Nigeria, of which you are a prominent member, seems to be quiet lately. What is going on in the association?

A lot of activities are going on and you may not hear anything about it because you are not a member. It is an association, not an individual; so, everything we do may not be publicised. Only this year, some of our members were trained in conjunction with PEFTI Film Institute on how to handle the latest cameras and other equipment. We actually do a lot of things that may not be known to the public. However, we would be holding our elections in November/December and our current president, Dele Odule, would be in charge of the process. I intend to run for the post of president of the association.

What are your plans for the association if you are eventually elected?

My primary concern would be members’ welfare. After that, it’s to make sure that our profession is not open to every Tom, Dick and Harry. I intend to restrict people who are not trained from operating in the industry. You cannot just come from nowhere and call yourself an actor or producer. We need many people to join us in the industry but they must know the rudiments of the job. I would work with sister associations such as AGN, DGN, AMP, among others, to look for ways to restructure the industry.

We would also pay attention to issues of health and the well-being of the elders in the industry. We would meet with investors and find ways to pump money into the industry. However, to be able to make a success of all this, I would need the cooperation of all and sundry.

It is generally believed that the pay in the Yoruba movie industry is poor. How do you intend to deal with this since you want to improve actors’ welfare?

It is the bargaining power of individuals that determines what they are paid. If you invite Odunlade Adekola for a job, he would tell you how much he wants to be paid; and the person would pay if he can afford it. If you call me for a job, I would also state my fees. However, we want to introduce a minimum wage in the industry. There is no maximum limit but there should be minimum pay in the industry for anybody that acts in a movie, even cameo roles.

Some people also insinuate that many ladies in the industry are glorified prostitutes. How do you intend to address this issue?

Anybody that says actresses are involved in prostitution should provide proof. We all have our personal lives to live and I cannot monitor what anybody does in their private moments. We can only educate ourselves through lectures and seminars on how to manage stardom. I cannot follow anybody home to tell them how to lead their lives. Everybody has a right to freedom but there should be a limit to all things. Meanwhile, there is immorality in all professions; not just in the movie industry. I don’t know any prostitute among us; you can mention the ones you know.

When was your breakthrough moment in the industry?

My breakthrough came gradually. I started acting in 1988 and I haven’t done any other thing since then. Every film I have acted in helped to make me more prominent and relevant. By the grace of God, all my movies are popular but the ones that stand out include T’alon gbemu, Baba Waidi, Oba ju Oba lo, Mr. President, Omo Ode de, among others.

You always give advice and admonitions in your movies. Is that a function of your upbringing?

My dad was uneducated but he had native wisdom. It was in our house that all conflicts in the neighbourhood were resolved. My father never heaped blame on anybody; rather, he dissected issues analytically and the person who was wrong would know after he had finished talking. A lot of people respected his judgment because of this. At a point, I also stayed with an uncle who was an army officer. He was a disciplinarian and he taught me a lot of things. Later in my career, I learnt that the essence of comedy is to make people laugh and also teach them lessons.

What do you love most about being an actor?

Stardom! I am able to open many doors with my name. I have been able to speak with presidents, governors, senators and other important personalities, both at home and abroad.

What has fame robbed you off?

There are so many things I cannot do now. I always have to be mindful of my conduct whenever I am in public. Whenever I step out, I also have to spend a lot of money because the demand is much from fans and other people.

Your childhood dream was to become a footballer. Do you still nurse regrets that you were unable to achieve it?

Perhaps, if I didn’t make it in the movie industry, I could regret not being a footballer. However, since I have been able to break through in acting, I have no regrets.

Do you speak Latin or what’s the origin of your stage name?

Who are the people you admire?

I am inspired by a lot of people such as Adeboye Aderibigbe, who is never pleased with my movies. My wife is also my number one critic. She always points out my faults in movies and it is because she wants me to grow. I admire them for that.

Your wife and children live in Ireland. How do you cope with their absence?

There’s no big deal about that. We speak about ten times every day. They come home regularly and I visit them a lot too. We plan together and we keep each other updated on our activities.

Have you ever been tempted to marry a second wife?

You once stopped your child from acting because he was in school. Are you prepared to let him get into the industry now?

My son is 18-year-old now and he already knows what he wants to do with his life. I speak with him as a friend now and we relate well. I will support him in whatever he does. When I stopped him, he was much younger and naïve and I didn’t want stardom to destroy his life.

How would you describe your experience at the National Open University?

I have had a good experience. I am in class with people who are younger than me. I’m even old enough to give birth to some of them. I was inspired to return to school because of former President Olusegun Obasanjo, who recently bagged a PhD at over 80 years.

What can you recall of your childhood?

I come from a very poor background. We used to feed from hand to mouth but we were disciplined. While staying with my uncle, he taught me the importance of hard work. If I didn’t do well in my studies, he would flog me. However, whenever I came first in my class, he would take me to the then Bata stores and ask me to choose any shoe I wanted. He also mandated me to always watch the news because he used to ask me questions on current affairs. As a result of that, I keep abreast of the news every day. I read the newspapers and watch the news on TV without fail.

For my elementary education, I went to Army Children Primary School, Abeokuta, Ogun State. I attended Gbogan Community High School, Gbogan, Osun State. I have also done some courses over the years. Right now, I am studying Peace and Conflict Resolution Studies at NOUN.

How did you feel when you couldn’t continue your education after post-elementary school?

I felt bad because I knew that if there was money, I would have continued my education. I remember that my parents called my elder brother and me and they told us that they could only afford to sponsor one child to school. Since my brother was more intelligent than me, I decided to let him take the slot.

How often do you make time for your family?

I wake my children up every day. I have five different alarms on my phone. I also call my wife before she goes to work, while she’s at work, and when she gets back home. Sometimes, I’m even the one that reminds her to pick the kids from school. That has made us very close.

I don’t relax. The most I do is sleep and that’s only at night.

What vice do you have?

I drink in movies but you can never see me in real life drinking carelessly. I don’t smoke and I don’t womanise. I am content with what I have.

I dress according to my mood and where I am going. I am not a loud person.