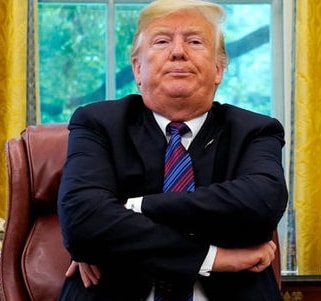 US President Donald Trump has been visiting the United Kingdom on the eve of the departure of the second female prime minister of that country, Theresa May ,who in tears resigned a few weeks ago over her failure to secure parliamentary approval for her agreement with the European Union over BREXIT.

The visit could not have come in a more inauspicious time. This State visit must have been planned over months ago and it is not something that could have been changed easily bar a state of war. But it seems the occasion suits the cantankerous Mr Trump. Ordinarily the British government would have laid the red carpet for any American president within the first year of his incumbency. In July 2018 Mr Trump paid what was called a “ working visit” to Britain and a State visit was promised for a year later.

Before leaving the USA Mr Trump tweeted that the Pakistani British mayor of London was unfit and unequal to the task of governing a first class international city like London . Sadiq Khan had also said he should not have been invited at all because Mr Trump represents the worst standard in leadership of a western democratic state. The dislike was mutual. But the fact that the mayor of London the capital of a major ally of the USA will be so rude to an American president shows how low president Trump has brought the American presidency, the most awesomely powerful political institution in the world.

Before leaving the USA a journalist had asked Trump what he felt about the 2016 remark of the Duchess of Sussex the American Meghan Markle calling him a misogynist. Instead of letting it pass, Trump described the Duchess as a nasty person. This is so undiplomatic that everybody was shocked. On approach of his plane to land in London he tweeted again calling the London mayor a “stone cold dead loser“ who reminds him of another “useless mayor“ Bill de Blasio of New York except that he is twice as big as the diminutive Sadiq Khan.

He had also said he would support Boris Johnson the rabble rouser racist former mayor of London as the successor to Theresa May. This at a time when about thirteen people have thrown in their hats into the ring to contest for the leadership of the British Conservative party and prime minister of Great Britain. In other words Mr Trump is arrogating to himself the power to choose the next British prime minister. He bases his support for Boris Johnson on the grounds that the mercurial and unstable Boris Johnson likes him. If the position of the prime minister of Great Britain will be filled on the basis of his liking Mr Trump then the British are in trouble .

Trump has also been publicly advising the British to crash out of the European Union and forget its treaty obligation to that body to pay 50 billion on exit. He has also been promising the British “ fantastic trade deal” if it exits the European Union by crashing out and avoiding any idea of customs union. Yes as a single country the USA takes about 18% of British exports. But the E. U together takes close to 30% of British exports. America can never replace Europe in terms of proximity, security, people to people relations and culture. Trump has also been loudly telling the British to include Nigel Farage in its negotiating team with Europe .

Farage is a populist hater of non British people and what can be called a “little Englander “ and belongs to the group of nationalists sweeping the whole of Europe from the Atlantic to the Ural mountains in Russia. When he was elected in 2016 he undiplomatically told Theresa May to appoint Nigel Farage as the United Kingdom’s Ambassador to Washington D.C. He was rebuffed and told it is only the British government that nominates to the Queen who will be Her Britannic Ambassador to any where in the world. He has angered members of the North Atlantic Treaty Organisation ( NATO) singling out Germany for allowing a Russian gas pipe line to be built to supply gas to Germany thus making Germany easy for Russian energy black mail. For personal family reasons of his grand father having been expelled from the German state of Bavaria in late 19th century he seems to dislike Germany and particularly Angela Merkel whom he accused of letting one million Arabs fleeing war in the Middle East into Germany.

He has fallen out with President Macron Of France by withdrawing from the Paris environment protocol necessary to reverse global environmental abuse and to preserve the world for future generations . He has also angered most leaders in Europe over withdrawing from the Iran nuclear deal agreed to under United Nations auspices to prevent Iran from developing nuclear grade uranium and having a nuclear weapons program. This was an agreement of the 5 permanent members of the Security Council namely, Russia, USA , Britain, France ,and China plus Germany.

Trump took America out of the international agreement and mounted economic pressure on the other signatories to abandon the Iran nuclear deal. He has not quite succeeded. But in the last few weeks he has sent an armada of ships and flown nuclear bombs carrying B52 bombers to the region threatening to wipe out Iran from the surface of the earth.

As if this was not enough he has been threatening to overrun Venezuela over the Maduro government’s oppressive regime in that country. His Secretary of State Pompeo says all options including military options are on the table to deal with Venezuela in case economic pressures do not bring the leftist government there down .In recent weeks Trump has given an ultimatum to the government of Mexico its southern neighbor to stop the flow of illegal immigrants into the USA. He has said starting from a week or so he would start taxing Mexican goods entering the United States by 5% to be increased every month until it reaches 25% if Mexico does not seal its southern borders with her neighbors to the south from where the illegal immigrants are flowing into the USA .

If he carries this out, the measure is a double edged sword which will hurt Mexico and the USA but the pain will be more severe on Mexico.

On coming to office in 2016 he immediately called for the cancellation of NAFTA( North American Free Trade Agreement) binding Canada, the USA, and Mexico together in a continental free trade area which has led to the prosperity of the three countries . Trump complained the agreement undermined the economy of the so called “rust belt” that industrial area of America producing iron and steel and aluminum.

He also disliked the treaty because it was one of the landmarks of the Bill Clinton’s Democratic Administration . The agreement perhaps needed amendments here and there but cancellation of two decades old agreement is not the way to go . Its replacement negotiated by the Trump administration is bogged down in Congress which must approve it before it can become law .

Trump has also targeted China with Tariff war over its huge trade balance in favour of China and the stealing of intellectual property of America by Chinese companies which always insisted that American companies trading in China must enter into joint ventures which allows chinese companies access to Americas research secrets which the Chinese sometimes perfects to a more advanced level .

There has been retaliatory tariff war between the two countries whose economies have become intertwined with China benefiting from the huge American market while producing goods cheaply because of low wages in China thus undercutting American industries and laying waste several installed industrial machinery that can no longer compete in the global market with the Chinese.

A case in point of Chinese company bettering American company is that of Huawei which has been marketing its G5 equipment to mobile networks in Britain and the rest of Europe which Mr Trump wants to stop on the grounds that the company may pass security information to the Chinese state.

In all his battles Mr Trump May have a case but the aggressive way he is fighting like a bull in a china shop is not the best way lest he brings down the global edifice on all of us . In the dinner speech by Queen Elizabeth on the 3rd Of June 2019 ,the monarch reminded the visiting American President the painstaking effort taken to build a post war global architecture after the ruins of the Second World War . The building may be old but pulling everything down at once may be dangerous said the Queen. She is right .

Trump should know that no system is perfect . Yes America has a right to prevent its country being overrun by the poor of the world . Trump may be right to demand balanced trade with Europe and China . He may even be right to want to maintain pacific relations with Russia because of its awesome nuclear weapons .

But he must be told there are rules of the game of international politics .No Nation is self sufficient and even an awesome power like the USA needed the channel provided by Sekou Toure’s Guinea in 1962 for it to negotiate with the old USSR to prevent nuclear Armageddon .

Trump should read Robert Kennedy’s book on The Cuban Crisis.

Continue Reading
You may also like...
Related Topics:controversy, donald trump