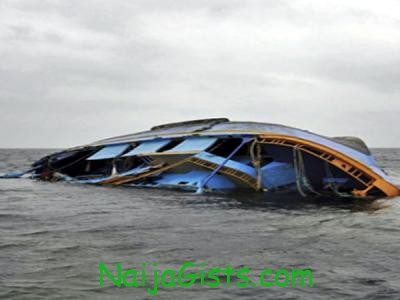 8 people died at the Sagbama axis of the Forcados River, in Bayelsa on Friday, when the boat they were travelling in capsized.

An eyewitness disclosed that the 15-passenger boat was carrying about 30 persons, bags of rice and cartons of drinks as at the time of the incident.

“People told the driver that the boat was over-loaded but he refused to listen, saying that it was his time to make money,” the witnesses said.

It was learnt that the victims, all male, drowned during the mishap, while others were rescued by sympathisers from other boats who responded to the shouts of the passengers.

According to eyewitnesses, four of the drowned passengers were Delta civil servants from Asaba, who were on their way to the burial ceremony of the father of their female colleague in Agoloma town in Patani Local Government Area of Delta.

One of the passengers, Sarah, said she and another lady swam in the water until rescue came from another passenger boat.

Continue Reading
You may also like...
Related Topics:bayelsa, drown, Eight