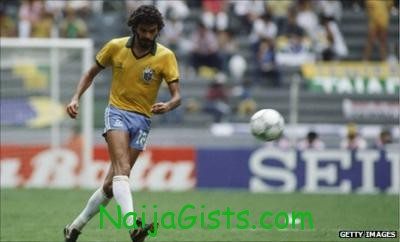 Socrates had been in a critical condition with an intestinal infection since being admitted to intensive care on Friday at a hospital in Sao Paulo.

Socrates, who was widely regarded as one of the greatest ever midfielders, was then moved on to life support machine on Saturday.

The former Corinthians player, whose full name is Socrates Brasileiro Sampaio de Sousa Vieira de Oliveira, was taken to the Albert Einstein Hospital in Sao Paulo with food poisoning on Friday, according to his wife.

A hospital statement said on Saturday that the former footballer was “in a critical condition due to a septic shock of intestinal origin”.

It added he was breathing with a ventilator and using a dialysis machine.

Socrates was taken to hospital twice in August and September this year with bleeding in his digestive tract. naijagists.com

After these incidents he admitted he had problems with alcohol, and especially so during his playing career. He is also well known for his smoking habit.

In a recent television interview, Socrates said he had considered alcohol his “companion” but believed its regular use did not affect his performance on the field. naijagists.com

“Alcohol did not affect my career, in part because I never had the physical build to play this game,” he said.

“Soccer became my profession only when I was already 24. I was too thin, and when I was young, I did not have the opportunity to prepare myself physically for the sport.” (BBC)