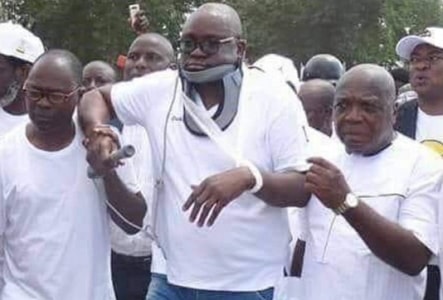 A youth social cultural group, Apapo Odo Ekiti has condemned the outgoing governor of Ekiti state, Ayodele Fayose for insulting the Intelligence of Ekiti state indigenes yesterday when he allegedly deceived Nigerians on a purported attack by the police.

The group slammed Fayose for what it called “his repeated uncivilized and unbecoming conduct as the number one citizen of Ekiti State which is a denigration of the exalted office of a Governor.”

In a statement on Thursday by its president, Adeyanju Fagbemi, said Fayose’s showing on Wednesday assaulted the collective sensibilities of Ekiti people both at home and abroad.

“We are ashamed and ridiculed by the “show of shame” exhibited by Governor Ayo Fayose in transforming Ekiti State Government House into a Nollywood film shooting location.

“We are embarrassed by his theatrics of putting up a neck collar as a consequence of the alleged shooting of tear gas by the Nigeria Police to disperse a gathering of people which posed security risk at the entrance of the Ekiti State Government House.

“For our collective education and information, the Ekiti State Government House is the patrimony of the good people of Ekiti State irrespective of political, religious and ethnic affiliation.

“Unfortunately Mr. Fayose has continued to assault the collective will of the people of Ekiti State by his deficit of respect, etiquette and decorum by transforming the state house into a political party campaign ground.

“By assembling a crowd of partisan political supporters at the entrance of the Ekiti State Government House, Mr. Ayodele Fayose, has intentionally undermined the security of the office of Governor and the people of Ekiti State which is an assault on his constitutional oath.

“However, we must commend the Nigeria Police Force led by DIG Ekiti State for living up to its constitutional responsibility of maintenance of law and order by dispersing the provocative and unruly crowd instigated by Mr. Ayodele Fayose with minimal force in a civilized manner.

“We are hereby using this medium to call on the good people of Ekiti State not to be hoodwinked to fail in exercising their constitutional right on election day or be incited to violence by this agent provocateur of a Governor.

“We call on the good people of Ekiti State to be resolute in exercising their franchise on election day for the candidate of their choice based on integrity and merit without fear or favour.”

Continue Reading
You may also like...
Related Topics:ekiti, fayose, people