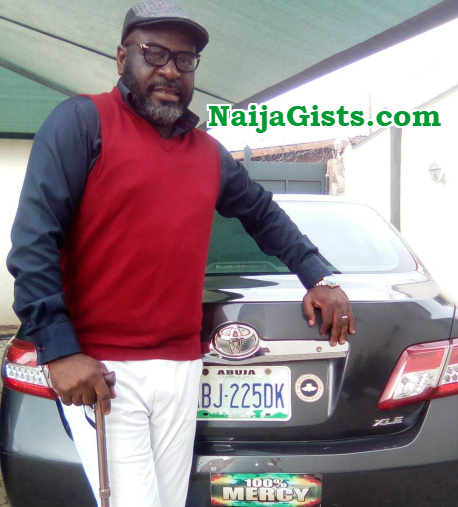 One of the cutest actor in Nollywood Yoruba film industry, Funsho Adeolu has revealed the never before told story of his life.

The proud father of two and a lovely husband of one wife in this recent interview with The Entertainer speaks at length on how he joined Nollywood, his dedication to God in Redeemed Church and many other issues;

In the beginning I was born on May 9, over four decades ago. I hail from Ondo State and I read Guardian and Counselling at the Ondo State University (OSUT). But I was already acting before I concluded my university education because of the passion I had for the entertainment industry even when I was growing up. For me, growing up was like fun because I had time for myself and to the glory of God, I’m able to achieve what I have set my mind to achieve in the industry.

Today, I’m one of the Ondo State Cultural Ambassadors for Culture and Tourism. The Ondo State government under Governor Olusegun Mimiko honoured a few of us making the state proud in the industry and it was interesting that people up there could appreciate us.

I feel humbled by the honour.

How I got into acting

Before I got into acting, my aim was to make a name for my children, my grandchildren and myself. I have set my mind to make a name they can live on, even when I’m no more. I had wished that my name could help my generation and the next generation after me.

So, I developed the interest because of the passion I have for the entertainment industry. My secondary school days were at the Baptist Academy. Then, and even when I was a Higher Student Certificate (HSC) student, I used to attend the Baptist Church.

I was one of the instrumentalists at the Baptist Church in FESTAC Town then. As a choir leader of the church, I later met Niyi Ojemakinde, the broadcaster, who also was a choir leader in another church, also in FESTAC. That was how we met and started a dancing crew named Monidex. We gathered quite a number of young boys and girls and floated the group.

At the time, we were also young, and we were just enjoying ourselves. But the passion, the interest later grew beyond that and we later invited Mr. Antar Tunde Laniyan to be our trainer. He was to train us and put us through since he was a professional.

That was how it all started sometimes in the late ‘80s. But interestingly, Antar saw the talent in me. He noticed the passion that drove me and quickly developed a special interest in me. He immediately took me on and I became what I am today.

Those who made me First, my parents are wonderful. They gave me the time to express my God-given talent. Antar Laniyan also played a very important role in my life. He was like a mini-god that held my hand and led me to my destiny. At a particular time in my life and career, he’ll be there to play the role of this messiah. So, he has been wonderful to me.

For instance, the first film I featured in was Ida Oluwa. The late Funmi Martins produced it. Antar Laniyan was the director. So, he really played wonderful roles in my life. My wife has been wonderful too. She remains my very close friend and has played the role of a mother, a wife and a friend. We are that close and God has on so many occasions used her to touch my life positively.

I am a total entertainer in the real sense of the word.

I do general entertainment, I have a band, I compere events as a Master of Ceremonies, and I cover events and manage events. And as an event manager, I do all sorts of entertainment. I’m not an office person. I am involved in entertainment at all levels.

How I get inspired God inspires me. I’m also inspired by the script from the director. Let me say for instance, in one of the movies I featured in not long ago, I played the role of a blind man. It was in the movie entitled Agbaakin, a Yoruba movie.

It eventually turned out to be a fantastic role because I did it differently. In the movie, as a blind man I didn’t wear eyeglasses. I opened my eyes and it worked. I did it perfectly. Most times, I like to be different in whatever I do. For me, money is not the determinant factor.

Money matters because I have to pay some bills, but I don’t see it as the most important factor to whatever I do in life. I’m not that rich but I’m comfortable and I enjoy what I do for a living. That’s where I derive my joy. So, for whatever role I play in movies, I’m inspired by God.

For instance, if a certain producer invites me for a role in a movie, I don’t charge a constant figure. It all depends on my mood. It depends on how rich I am at that particular point in time. More so, if I like a script, I will do it. Sometimes, my fees are high and sometimes they are not. But I thank God that I’m still relevant in the industry.

My social life I’m not a party person, but I do attend parties every weekend as a Master of Ceremonies and Event Manager. Sometimes, I attend family outings when I’m invited. What I value most I value what people say about me when I’m not around.

What people say about me matters most. So, I make sure that in everything I do, people must see me as a role model. I want to be real and original in everything I do. I don’t pretend and I hate pretenders. My most memorable day That was the day I got married. It was on December 18, 2004, about nine years ago. That was the day I got married to the only friend I had. She’s very close to my heart. She’s Mrs. Victoria Adeolu Adegeye from Akwa Ibom State.

My God and me

I’m a religious person. I attend church always. I am a devoted member and worker in a parish of the Redeemed Christian Church of God in my area. My wife is even a very active member of the church. In truth, I don’t joke when it comes to the issue of my relationship with God. Sometimes I go on long days of dry fasting while on location, without eating anything. It’ll never affect my mood even when I’m on set.

That’s me. For instance in my church, we do our annual 21 days of fasting and prayer and most of the times, it coincides with the days I would have to be on location. I don’t break the fast, and it has never affected the role I play or how I act in movies.

[Interview by Kehinde Aderemi, The Entertainer]